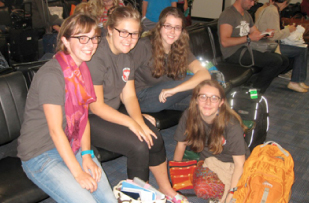 It's crazy to think that another year has flown by. I have to say 2012 was the busiest and the most fulfilling year of my life. This time last year, I was freaking out about so many different things, most of them exchange related; my interview for NSLI-Y, my application to come [on YES Abroad], and finals for school were coming up. And now I look back and see that all that work paid off. My entire year was full of the most amazing things, things nobody could have possibly predicted and they are as follows:

1. In January I finished my application in the nick of time.
2. It was my birthday and YES semi-finalist notifications occurred in February.
3. March was the In-Person Selection Event weekend for YES Abroad, where I met some pretty fantastic people.
4. On April 13th I was awarded the YES Abroad scholarship to Bosnia and Herzegovina!
5. May marked my performance season at the Tournament of Plays and State for Choir.
6. Good-byes and hellos were filed in June with my last day of school and the Pre-Departure Orientation in DC.
7. Eventually, camp and a trip to Canada rolled around in July.
8. Finally August came with the hardest goodbyes, but the most exciting hellos beginning in Sarajevo.
9. Bosnian school started in September which began the beginning of the end.
10. October brought new friends, Race for the Cure, and witnessing of Eid celebrations in Bosnia. Oh! And the beginning of snow!
11. We traveled to Mostar and I shared with my host family here an American Thanksgiving in November.
12. And December was a million Christmas parties and the ending of the best year of my life...so far.

As 2013 dawned, I realized that Sarajevo has become my home. When I first arrived and had to tell people that I needed to go back to my host-family's house, I would say, "I need to go back to where I'm staying." I've realized on several occasions now that I simply say, "Hey, I need to go home now." I’ve stopped calling my host parents and siblings, "host" parents and siblings and started to say my brothers and sisters and parents. "Host" is just a term that I use if I ever need to clarify. I've stopped being nervous to meander through the house and find it as comfortable as my home back in Oregon. The city has become extremely familiar and it's funny to think that five months ago, I had never stepped foot here. Sarajevo, Bosnia and Herzegovina is now my home and I wouldn't give it up for the world!

The year 2012 was brilliant and I wouldn't change any of it. Thank you to everyone who has gotten me to where I am today and I wish you all a Happy New Year! I am very excited for 2013. Here I am, half way through my exchange and there is still so much to happen. I turn eighteen in two months, I graduate in six, and I begin college in eight. Let this year be filled with new opportunities, new challenges, new friendships, and new adventures.