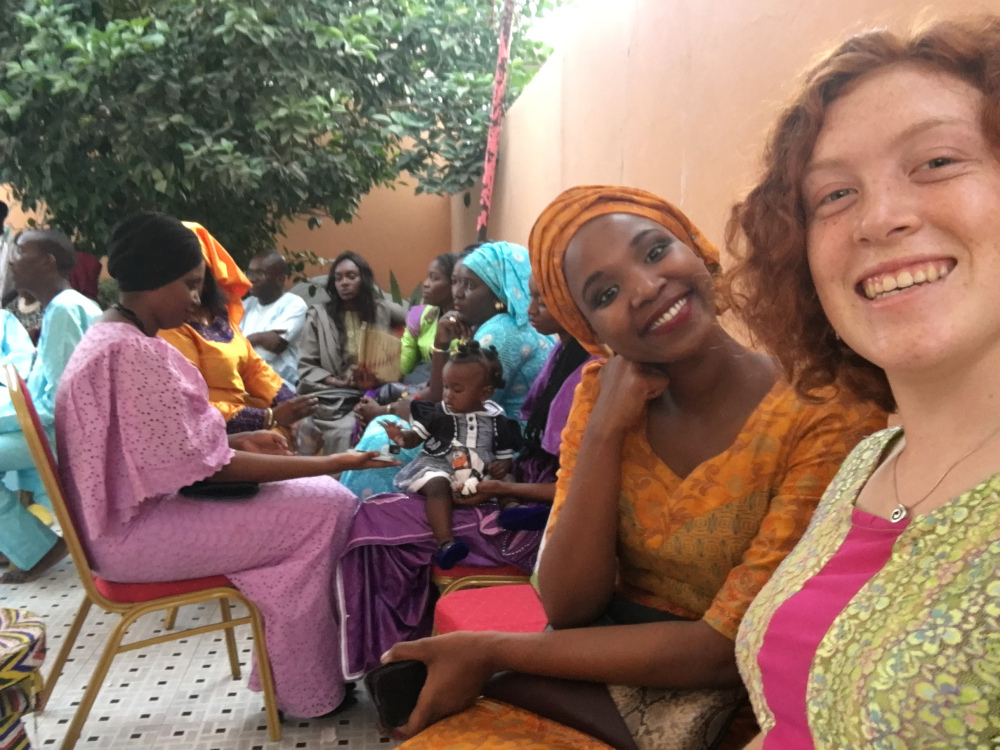 A few weeks ago I was lucky to have the chance to attend a Senegalese wedding! I was unsure of what to expect, but prepared myself to soak in every last detail. And what were my findings? That Senegalese weddings are super fun! They’re also very different from what I have experienced in the U.S., so I made sure to ask lots of questions,

I spent the afternoon preparing for the wedding with some of my cousins, aunts, and uncles. The preparations were elaborate, with my aunts doing their make-up and arranging headscarves. After we arrived, my first impression of the whole thing was how lively it was. There were lots of people sitting and socializing in the courtyard, loud music was playing, and tents were set up covering large sections of the courtyard. One tent was decorated with lots of fabrics and beautiful fringe along the edge of the roof. This uniquely decorated tent served as a welcoming area, and the bride’s family members greeted and took photos with guests inside it. Once my family had said hello, we found ourselves a table to sit and enjoy the music. At this point I was unaware that all of the people at the party were solely the bride’s family and friends, and that the groom’s family and friends were to arrive later. 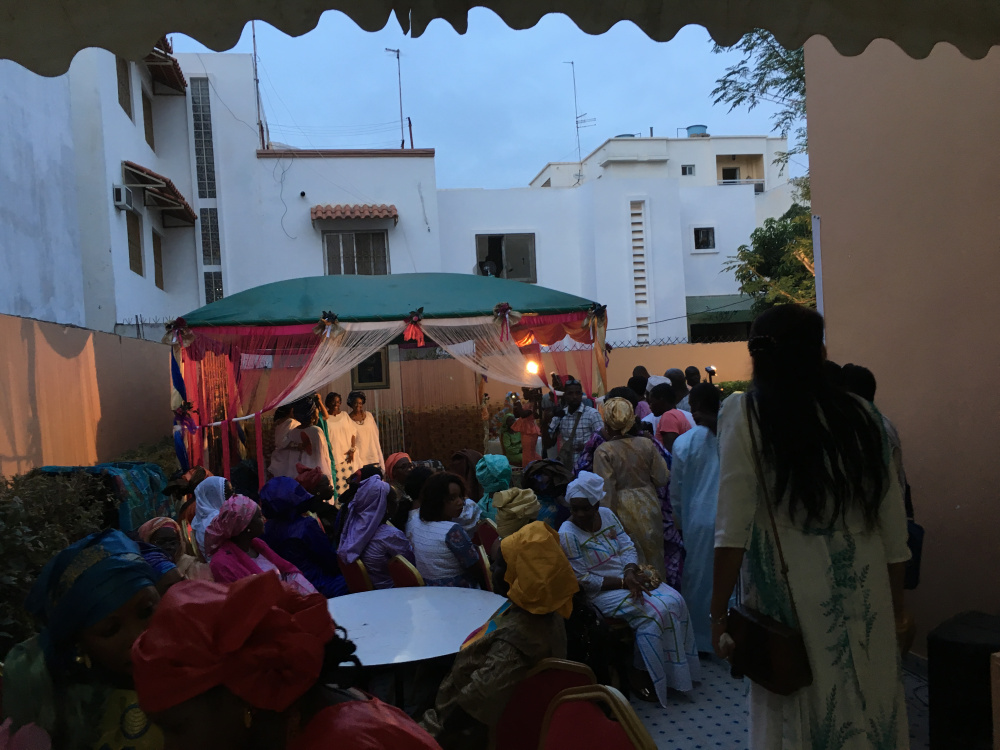 Once we had sat down, platters of little snacks were brought around to every table and everyone helped themselves. Each guest was also given a small bag of baked goods, such as madeleines and beignets, and at some point we were also given little decorative baskets made from a hard candy that tasted like peanuts.

Throughout our snacking, the music continued to play with the band of three sitting in the center of the crowded courtyard. One man played the guitar and sang back-ups, while two women played instruments made of gourds, one of whom was the main singer. People began to dance in a clump, often clapping along with the music to encourage each other. I enjoyed watching mostly, but did get up to dance a few times.

One thing that I noticed as soon as I arrived was the photographers walking around the party. During my time in Senegal I have learned that the Senegalese generally don’t really like to have their pictures taken, so I thought that perhaps people might be more open to taking photos at a wedding. I was wrong about this. Whenever a photographer came up to any of my family members, they almost immediately said no and turned away. If a person agreed to photos, they only took a few. I thought that the pictures being taken would go to the married couple after the wedding, but again I was incorrect in my assumption. Instead, all the pictures were printed out and every guest was given their pictures before the end of the night. I am assuming that the photographers were also paid for the photos by the guests, but didn’t actually see this happen.

This brings me to another aspect of the evening that was very different from weddings in the U.S. I began to notice that certain women had paper money pinned to their chest. When I asked what this was for, my aunt told me that these are the cousins of the bride. They were working as servers, and guests are expected to pay them for it! As a way of showing that they are the family of the bride, they wear the money. I was surprised to see how quickly guests were to pull out money to give to members of the family as they served us!

The wedding dinner consisted of a large buffet with delicious salads, soup, meats, fish, rice, and couscous. Simple, but delicious! Around this time I was surprised to see a large group of people enter the courtyard and was informed that this was the family of the groom who had just arrived. This struck me as funny because it hadn’t occurred to me that the groom’s family wasn’t already at the party!

Around 8:30 pm, I headed home with my dad to get some rest for school the next day. I was sad to miss the rest of the wedding, but was grateful to have witnessed so much.  I have found that these types of celebrations are one of the best ways to learn about the Senegalese culture. The wedding was a learning experience, and a super fun one at that! I can’t wait to go to another!