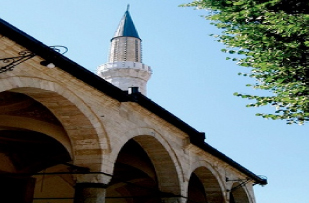 This post is all about a day called Bajram! Bajram is also known as Eid al-Adha which is the Feast of the Sacrifice, honoring the willingness of Abraham to sacrifice his own son Ishmael, according to the Muslim tradition.

In Bosnia and Herzegovina, Bajram is mainly a day for family and friends. My experience was exactly what I expected Bajram to be. My host family and I left early Friday morning for Tuzla, a city about a two-hour drive from Sarajevo. The drive was gorgeous, even though the fog did cover the majority of the scenery. Three hours later, we arrived at Granny's house (my host Mom Nizama's mom)! Also there were Nizama's brother, his wife, and two kids. The beginning was very relaxing. We watched some TV, we ate lunch, and we talked. Then everyone changed into nicer clothes and we took off for the house where the ox was going to be sacrificed per the customs. We arrived at the house, where we were ushered into a room with other people who we were going to share the ox with. Within five minutes of sitting in that room, food and coffee were set out on the small coffee table as we waited for it all to begin.

My host brother Irfan then suggested that we go to a small town about twenty minutes away from Tuzla for a little while. So he, my host Mom, her sister-in-law and I piled into the car and took off. We walked down a lovely street where all of the stores were closed because of Bajram - except the cafés, of course - and enjoyed a little fresh air and company, grabbed some lunch, and then headed back for, what I thought was going to be the sacrifice.

But it was not to be! We missed the killing by a few minutes and the men were already hacking the carcass away and separating the meat. In the Muslim tradition and during Bajram, usually a sheep, goat, cow or an ox are sacrificed and two thirds of the meat is donated to charity or is given away to friends and family.

We were then brought back into the friend's house where we talked to some other people and I was congratulated on my basic Bosnian, because someone told them I didn't know any Bosnian. But when a girl's mom walked in, she walked over and introduced herself and asked if I wanted to have coffee and before anyone could say anything, I immediately responded with my name and that I didn't want coffee. The girl looked over at me and exclaimed that my language skills were good and I could feel myself blushing.

After a little while of talking, supper was brought in (my stomach was about to explode, I swear) which included a variety of Bosnian pies or “pita,” including “burek,” and a stew of the fresh meat. When our meal was cleared, they brought out cake and baklava. One thing you should keep in mind if you intend to visit Bosnia: They are extremely hospitable and they will feed you until you are rolling around on the floor. And I love them for it!

Night eventually came and we loaded back into the car with enough meat and food to last us a week. The ride was silent as everyone curled into their own little corner and fell asleep. Well, except for my host Dad Esad naturally because he was driving.

All in all, Bajram was just a day of friends, family, talking, and - most importantly - eating. And it was wonderful to be a part of and witness it!