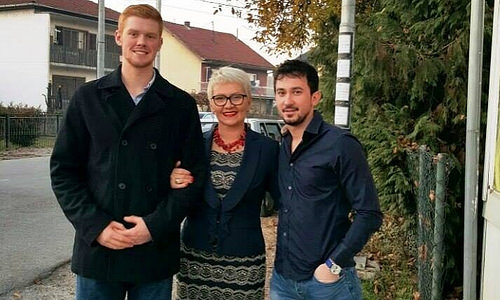 In my humble opinion, a Bosnian wedding is like no other celebration on this planet. Traditional music, dancing, and food mixed together with jubilant people who have been celebrating the whole day create quite a scene. This celebration of love and family left quite an impression on a young, American exchange student. And that’s where I come into the picture. About two weeks before the wedding, my host brother told me that I would be joining my host family to go to a friend’s wedding. I don’t remember thinking about it too much because I had no clue what I was about to witness. In the days leading up to the wedding, I kept hearing the same thing after I told locals that I would be attending a wedding: be prepared. Obviously, I started to wonder what would happen. In the U.S., I had only been to my aunt and uncle’s wedding, which was small and relaxed, and that memory from seven years ago was my only notion of what a wedding is like.

Finally the day of the wedding came. We picked up a few friends and crammed into a tiny European car heading up the mountain road to the wedding. After squeezing out of the car, we grabbed our nice coats and walked in the cold towards a large building where the wedding would take place. The next few moments I will never forget as long as I live. The doors opened to reveal a huge room, larger than a football stadium, and filled with twice as many people. People laughed, shouted, and sang at the top of their lungs. Glasses were broken and the bride’s mother ran around trying to toast everyone. It was only 7:30pm. Traditional music was playing and people were already dancing as we searched for our seats. It amazed me was how many people my host family knew and greeted; it seemed like everyone I had ever met in my life could not have filled one quarter of that room. 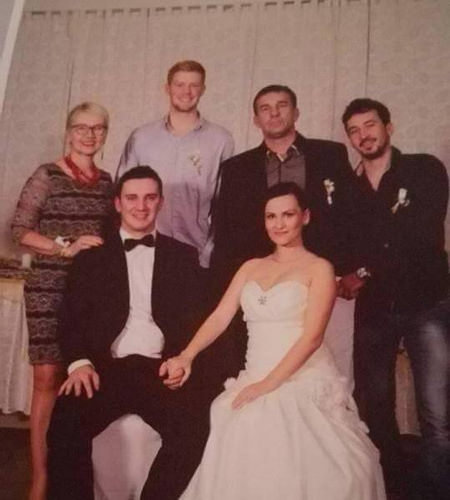 Another thing I noticed was the amount of respect and love shown to the bride and groom - they were treated like kings and queens, and that night must have been the best night of their lives. Everyone lined up to have their picture taken with them, and they sat at a giant table with the best man, maid of honor and close family. People were genuinely excited for these young people to be joined in marriage. One difference I noticed between my aunt and uncle’s wedding in the U.S. and this wedding celebration was that people seemed extremely happy to be there, and everyone enjoyed every moment. There were no brooding teenagers sitting in the back on their phones, no old people sitting grumpily complaining about food, and certainly no one making the wedding worse for themselves or anyone around them. I think the reason for this is the fact that these wedding traditions – the dancing, the food, the royalty of the bride and groom – have all been around for dozens of generations; the amount of respect that these people have for one another and their laughter filling the entire room are two things I will never forget.

After eating one amazing dish after the other, I was asked to dance. Usually, it is a no for me on the dancing. Now, you must understand, I am not the dancing type. Being six feet four and very clumsy, I must have looked like a ginger abominable snowman. However, I reasoned that it is most likely that no one I know would be in the mountains of Banja Luka, Bosnia and Herzegovina, so I gave it a try. People of all ages gathered on the dance floor in front of the band and danced like there was no tomorrow.  Nobody held back, and certainly nobody felt self-conscious. A ninety year old Bosnian grandmother would be dancing as freely as the twenty year old next to her. I joined in the large circle dance called Užičko kolo, a dance hailing from Serbia, which is rumored to have been danced since the Kingdom of Bosnia in the 12th century.

Hours passed and more food was put on the tables seemingly every ten minutes. People laughed and joked, and just had an amazing time. Eventually, as more people figured out that I was American, they started coming up to me and practicing their English. I felt great to be able to help them, and by responding in Serbian I practiced my own language skills. I love the way people here listen to stories others want to share. They seem to genuinely care about what someone has to say. I am used to pretending to listen to boring stories about uninteresting personal things I do not care about, but in this country they always listen to the whole story without interrupting. They smile and keep eye contact, and after they offer advice or laugh depending on what the person had said before.

After talking with new friends, I took shifts between dancing, eating the best food ever cooked, and attempting to understand the songs being played. The people there were amazed to see an American in such a Bosnian setting. People of all ages came to greet my family and me to toast to health and happiness of the bride and groom. Truly, words cannot describe the fun and beauty of a Bosnian wedding, but I hope I painted a vivid picture of my experience. I am so grateful to be experiencing the beauty of the Balkans and the amazing culture of its inhabitants. Also, I hope that everyone can experience a Bosnian wedding during their life; I can guarantee that anyone would have a wonderful time.