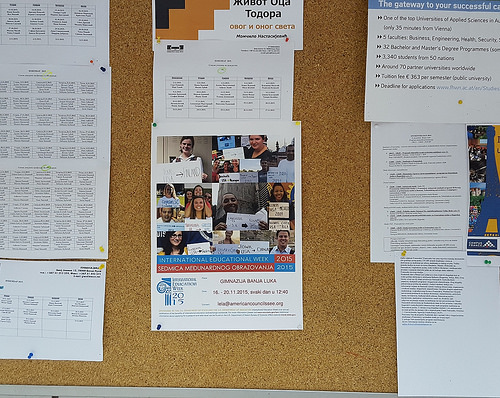 From November 16 until November 20, 2015, YES Abroad students in Sarajevo and Banja Luka organized a number of events to celebrate International Education Week. IEW is a joint initiative of the U.S. Department of State and U.S. Department of Education that is celebrated in more than 100 countries worldwide. American Councils for International Education’s Bosnia and Herzegovina office helped organize and coordinate the events for YES Abroad students in Bosnia and Herzegovina. With the help of Gimnazija Banja Luka and AC’s office, the YES Abroad students in Banja Luka planned daily events in which scholars and participants of U.S. Department of State programs gave lectures on topics they are passionate about and consider relevant for the global environment. Students in Sarajevo gave presentations to their classmates and the general public on life in the U.S., the American education system, and more.

International Education Week kicked off at Gimnazija Banja Luka with a presentation by YES Abroad student Georgie B. about life in small town America. She spoke about her life in a small town in Pennsylvania, her school, and every day activities. She also discussed things that are not familiar to BiH students, like school buses, fall and summer sports, homecoming, and school bands. Questions about the reality of life in the U.S., as well as Georgie’s thoughts on Banja Luka and Bosnia and Herzegovina followed. Her fellow YES Abroad students, Matt M. and Alex M., cheered her on from the audience. 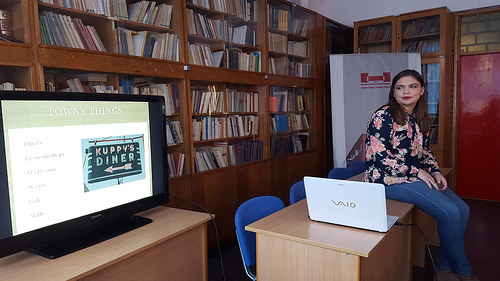 The next day, Dr. Susan Nolan, a professor at Seton Hall University and current Fulbright scholar in BiH, Ms. Maria Stavropoulos, Deputy Head of the U.S. Embassy Branch Office in Banja Luka, and the YES Abroad students in Banja Luka spoke about various exchange programs offered by Education USA and the Department of State. The speakers and students offered detailed insight into the American higher education system, the application process, and student-professor relations. The group strongly encouraged students to study abroad and apply for one of the exchange programs sponsored by the U.S. Department of State. 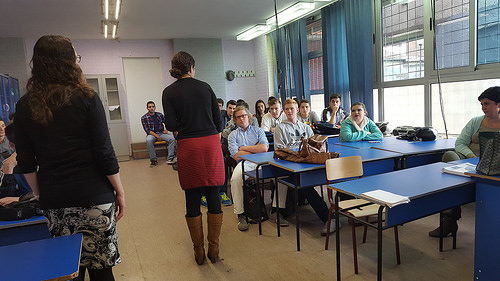 On the third day of IEW, YES Abroad Banja Luka students attended a lecture by Ms. Emily Gray, a Fulbright English Teaching Assistant in BiH. She spoke to the YES Abroad and local students from the public, or “national,” program in Gimnazija Banja Luka’s reading room. Her lecture covered American extracurricular activities, and Ms. Gray reminisced about her time at Yale University where she was a part of an a cappella group. While students in Bosnia and Herzegovina join choirs and have music clubs in schools, an extracurricular activity which entails “Glee” club or a cappella is not familiar to local students. 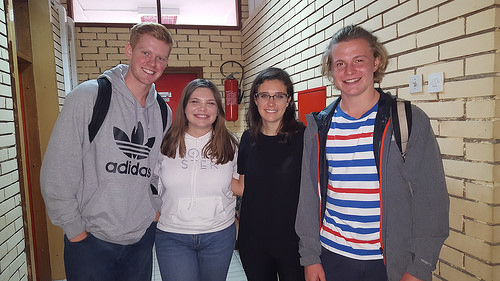 Meanwhile, YES Abroad students in Sarajevo, along with three YES alumni, hosted a presentation on American culture and the benefits of international education at the Multimedia Center Mak. The presentation was based upon the students’ own experiences studying and living abroad. The event was held in the evening and was open to the public. Over twenty guests came to learn more about American culture, the similarities and differences between the education systems of Bosnia and Herzegovina and the U.S., and the exchange programs that American Councils for International Education administers. As a little sample of America, the YES Abroad students also made dozens of delicious chocolate chip cookies to pass out to attendees. 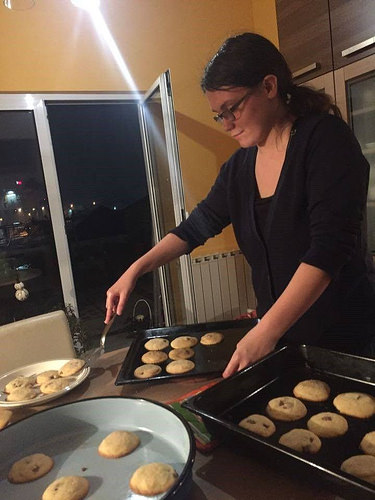 The next day, the YES Abroad Sarajevo students gave a similar presentation about American culture at their host school during their theory of knowledge class. The 5 students took turns discussing different aspects of American life, including: American foods, holidays, sports, and high school traditions. The students made more delicious American chocolate chip cookies and passed them out to classmates during the presentation. Angela G. noted that the event was a big success and allowed for great cross-cultural sharing:

The entire class was paying close attention and [was] genuinely interested in the presentation!” She added that “at the end, we opened the floor to questions and received really thoughtful informative questions from our classmates! I really feel as if sharing our culture with them has opened the door to deepening our relationships with them, and I look forward to seeing where this cross cultural learning will take us in the near future. 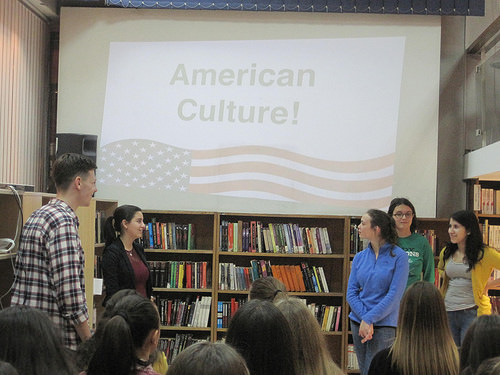 On the same day in Banja Luka, Matt M. gave a lecture to over 40 classmates in Banja Luka on an issue he is passionate about: the effects of the environment on human health. Specifically, Matt’s lecture, titled “Challenging Assumptions for an Optimal Life,” aimed to bring awareness to the effects of natural and artificial light on the human body. Fellow YES Abroad students in Banja Luka and Kristina Lukajić, the YES Alumni City Representative, were also in attendance and cheered Matt on throughout his informative presentation.

For the final day of International Education Week, Alex M. spoke about the current situation in the Middle East and the refugee crisis in Europe. In front of his IB classmates and two of his teachers, Alex and his YES Abroad Coordinator discussed the history of the Middle East, events relevant for current developments in the region, and how to move forward. Fellow YES Abroad students gave support and asked questions at the end of the lecture to start a small discussion with classmates. 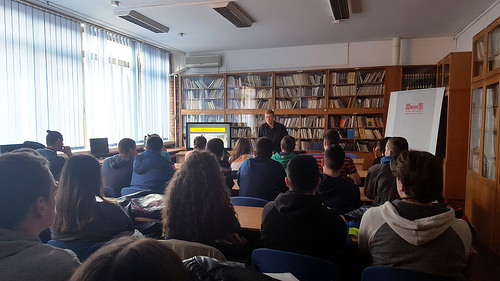 All in all, International Education Week in both Sarajevo and Banja Luka, Bosnia and Herzegovina was a great success! As Banja Luka's YES alumni city representative Kristina Lukajic wrote:

Each day, the reading room at Gimnazija Banja Luka was filled with curious students and teachers, wishing to learn and share ideas, which sums up the main point of the International Education Week: to promote international understanding and celebrate the benefits of international education and academic exchange.

YES Abroad students in Banja Luka were thrilled to share their culture, lifestyle, and country with classmates and teachers at Gimnazija Banja Luka, while those in Sarajevo felt that their presentations with classmates and the public allowed them to enhance mutual understanding. All of the students are excited to continue representing the U.S. and sharing American culture throughout the rest of the year.