Christian Orthodox Slava: What is it? 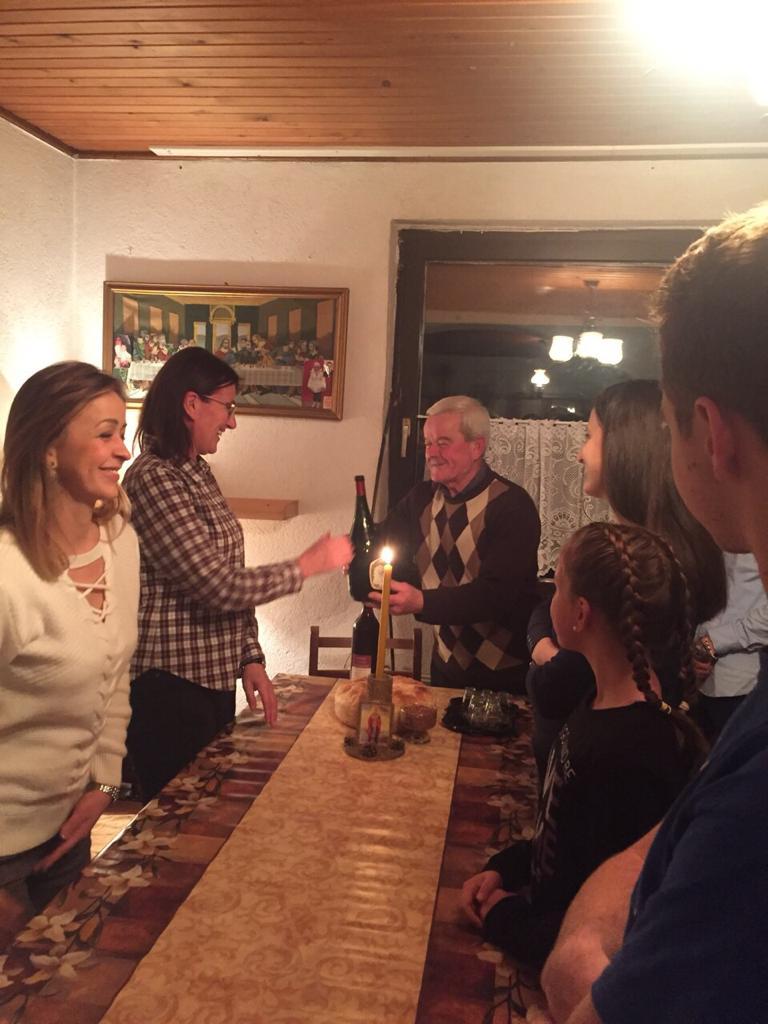 By: Kelton M., YES Abroad 2017-2018, Bosnia and Herzegovina, from Winston-Salem, North Carolina. (Photo above Kelton and his family the night before the Slava)

Thanksgiving is a wonderful holiday that all of us Americans know and love. But what if I were to tell you that here in Bosnia and Herzegovina, along with other Christian Orthodox countries, you can enjoy a massive holiday feast with your family and friends more than once a year?!

All Serbian Orthodox families have a patron saint that is passed down paternally through the generations. My host family has Saint Nikola as our patron, which means that on December 18 my family and I traveled into the mountains to my host grandpa’s village to prepare to celebrate Saint Nikola the next day on his official Slava. On Slava Eve (it’s not actually called that…) we had huge a feast, including a series of traditional ceremonies.

First a small bowl with hot embers and tamjan (frankincense) is passed around and each person must waft the smoke towards them three times. You then cross yourself the way Orthodox Christians do—using only your thumb, pointer and middle finger. Next comes a bowl of minced and boiled wheat, which you’re supposed to pick up and eat three times while being extra careful not to drop any in fear of bad luck. Lastly, everyone must cross the traditional bread called slavski kolač with a small glass of wine and say the prayer glorifying God and the Slava. Everyone chuckled as I stumbled through the prayer, likely mispronouncing everything possible.

Saint Nikola’s Slava falls in the middle of one of the main Serbian Orthodox fasts, which has implications on the festivities. Each family and individual observes the fast differently--some refrain from drinking alcohol, smoking, or eating meat and other animal products for 40 days. Most locals, however, follow a scaled down version and only fast on Wednesdays or Fridays, or on other special days.  Or perhaps they eliminate only a few of these components from their life. My host family fasts on special holidays, when we eat food that is posno (essentially a vegan diet where no animal products are allowed, besides fish and fish products). 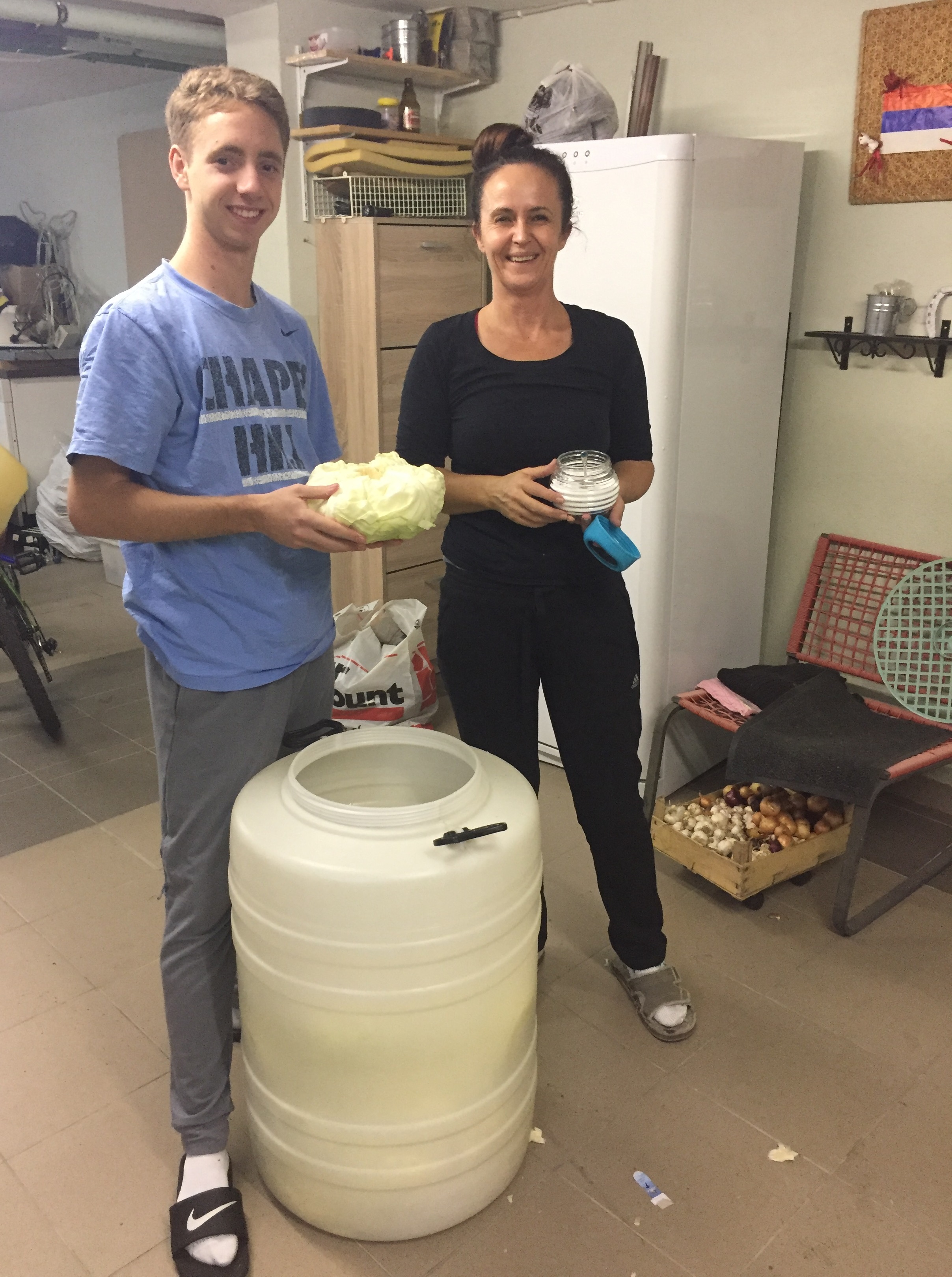 Because our Slava was in the middle of the fast, this meant for our Slava we ate all posno. A great many dishes were brought out, and we sat around the table for hours on end keeping ourselves in a perpetual state of stuffed. Most of the food is fairly simple, but delicious. We started with a fish soup; then came my favorite—the fish sarma. This is a rather labor-intensive dish to prepare, but I can attest it is 100% worth it.

You’re wondering what sarma is, I imagine. (Photo on the left: Kelton with his host mom, preparing cabbage for sarma) Convenient, as I am dying to talk about it! First, you take entire heads of cabbage and carve holes in the bottom. These holes are filled with a great amount of salt. Next you are going to take all of your salty cabbage and put it in a giant barrel, fill that whole barrel up with water and more salt, then let that sit in your basement for a month or two.  You then crack open your giant barrel a couple months later to reveal a pungent odor of salty, wet vegetable, which will smack you upside the head and leave you dazed and reeling. Next, recover, then peel the cabbage away and use it to wrap it around some deliciously-seasoned meat and rice. (Typically, sarma would be beef, but as this was in the middle of the fast, we used fish.) Last, these rolls are then stewed on a cooktop for a while and served piping hot. After taking my first bite, I exclaimed, “Serbian Sushi!” and thus landing my best joke of the weekend.

Following the sarma, we continued to stuff ourselves with fish fillets and more pickled vegetables. After multiple hours of conversation and gorging on food, we all retired into our respective food comas. The next morning, on the official day of the Slava, we repeated the entire process over again. At long last, afternoon came, and we returned home to try to burn off all of the calories.

While this was a great time spent with my nuclear and extended host family, the real kicker is that the best thing about this region is that you can also go to all the Slavas of your friends!  Frankly, if someone invites you, it’s almost rude not to go!  This past winter I’ve attended upwards of five Slavas at the homes of friends and relatives. While I’d be lying if I said it hadn’t taken a toll on my waistline, what else I’ve gained has been totally worth it.