A Day in the Life...Playing Soccer with the Locals 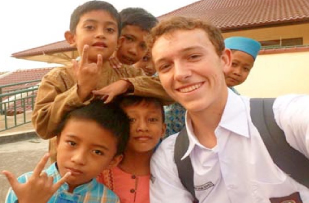 One day not long ago I decided to take a walk around my neighborhood. This short walk luckily brought me to a whole new group of friends - all of them in SD (elementary school), but nonetheless I think I lucked out!

I walked down an unpaved street that bordered an elementary school on one side and a big open field on the other. As I walked by, the usual call of ‘bule, bule! ‘ and ‘Hey Mister,’ rang out. After acknowledging those who called at me and bridging the confusion as to why I could speak their language (both Indonesian and some Sunda language) and why I was there at all (A bule, a young bule, in Karawang? Unheard of), I was invited to play with them. After playing with them, I have gone back to play with them a few times. I’ve played soccer and taught them"duck-duck-goose," an American children's game, and even taught them a game you play with raising your thumbs that I learned at our YES Abroad Orientation in Jakarta, which was supposedly a ”traditional Indonesian game," but I guess just hasn’t yet trickled down to Indonesia’s newest generation. Well... I taught them, so I guess one could say now it has!