Discovering the World, and Herself, in Malaysia 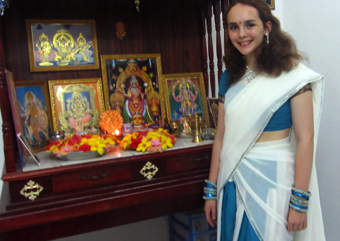 Hannah Foster knew she was in for an unforgettable year soon after she stepped off the plane in Malaysia and had her first encounter with a squatting toilet.

“It was a very ‘Toto, we’re not in Kansas anymore’ feeling,” she says. “This was after one of our group members walked into the male bathroom because the sign was in Malay.”

But as she grew into her new surroundings as a member of Kennedy-Lugar YES Abroad program, a year-long program created to foster relationships overseas with high school-age youth ambassadors, she found that certain things weren’t very different from back home.

“A lot of my classmates knew more about American movie stars and music than I did!” she says. “Also, teenagers will be teenagers. They want freedom, relationships. Girls get into drama, guys play video games.”

Still, life in Malaysia took getting used to, from the extreme temperatures and transportation styles to the exam-based culture and unfamiliar language of its schools. But straying outside one’s comfort zone, Hannah says, is what the program is about in the first place.

“AFS has a great saying, ‘Not good, not bad, just different,’” she says. “I applied that a lot to my school life in the beginning. I learned to not immediately take a negative view on cultural differences, but rather to see both sides of why they exist.”

As Hannah took part in unforgettable adventures like a trek through the jungle, she realized that the experience was changing her in ways she’d never expected. She was becoming more patient, more likely to experiment, and less likely to judge others. But most importantly, her need to communicate overcame everything.

“I’m now more confident and assertive when facing questions,” says Hannah. “I was kind of a shy person before I left, and I’m more outgoing. I learned a lot of the language by speaking it with EVERYBODY. I couldn’t afford to be shy if I wanted someone to understand me.”

One thing she’s definitely not shy about is encouraging others to participate in YES Abroad. Hannah’s program has given her experiences and skills that she wishes every high school student could have, and she’s especially grateful to the State Department for “opening the door to a global future.”

“It’s the best thing I’ve done and I don’t regret it,” she says. “It will make you rethink a lot about your home country, your host country, and even yourself.”