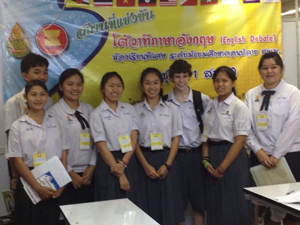 A Fairfield high school student is spending a year in Thailand, both studying and teaching, as one of 65 young Americans awarded scholarships through a U.S. Department of State program.

John Hewitt, a student at Fairfield Ludlowe High School, is spending his sophomore year in the Kamalasai province of northeastern Thailand, through the Kennedy-Lugar Youth Exchange and Study (YES) Abroad program. The competitive, merit-based award covers the cost of an academic year abroad.

Hewitt is living with a host family in Thailand, attending a high school there, and as a community project, teaching English to a class of 30 elementary school children.

Through the YES Abroad program, Hewitt and the other scholarship recipients serve as "youth ambassadors" in their host countries, according to a State Department news release, by building relationships with host families and friends, and through their volunteer community service.

The Kennedy-Lugar YES program was first authorized by Congress in the aftermath of September 11, 2001, terrorist attacks in an attempt to increase dialogue and understanding between the U.S. and nations with significant Muslim populations. Initially created as a program for international high school students to live and study in the United States, the YES program was expanded in 2007 to include YES Abroad for American high school students. The program is administered by a consortium of non-profit organizations led by American Councils for International Education.