"In Gaziantep, I'm a Local" 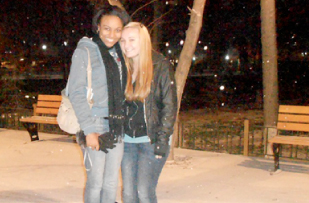 The most exciting thing I experienced this month in Gaziantep was snow! Coming from California it never snows, so living in the snow here (even if it was for only two days) was a very special thing for me. And apparently it hasn’t snowed so heavily and for so long in Gaziantep in about a decade so it was a very special week for my family as well.  On the morning of the first heavy snow this week my brothers invited me out to play. Making snow angels and snow men and having snowball fights was something I had only seen in the movies. Being here for the first full snow Gaziantep has seen in years was definitely the highlight of my month.

On the day I got back to Gaziantep from my short vacation in Istanbul at the end of December, my entire class in Gaziantep called me to sing “HAPPY CHRISTMAS KENDRA!” It was so sweet and made me so happy. I had felt like such a tourist in Istanbul; waiters handed me English menus because they assumed I was vacationing there and spoke no Turkish. Coming home to Gaziantep was almost the best part of the trip because, for the first time, it felt like I was arriving home. I realized I had missed my city, my classmates, my sister, and the familiarity of it all. In Gaziantep, I'm a local.