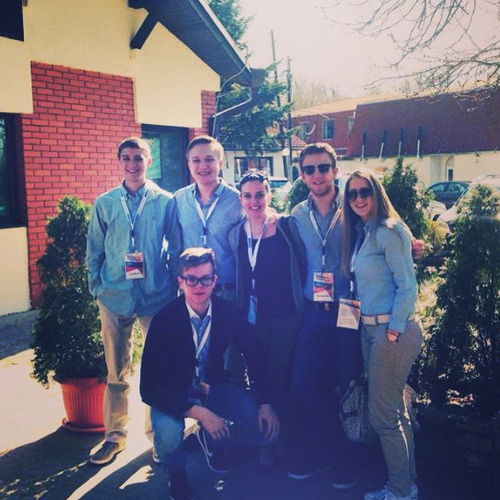 Early in March, the IB coordinator at our school, Druga gimnazija, informed me that I was one out of three students selected from our school to attend International Days at Rudjer 2014! We were to travel to the school of Rudjer Boskovic, located in Belgrade, Serbia.  This was a two-day economic conference where students from many different IB schools are brought together to discuss different economic, political, sociological ideas and issues in general and then relate them to the Balkan region.

After waking up in the early hours of the morning on March 19th, I headed off to the bus station to meet my companions for the trip.  We arrived in Belgrade at 1 pm with plenty of time to do some sightseeing.  After speaking to Emma (another YES Abroad student), who traveled to Belgrade last year on this trip, I made sure the first stop was the Nikola Tesla Museum.  Nikola Tesla was a Serbian-American inventor, an electrical and a mechanical engineer, and a physicist best known for his contributions to the design of the modern alternating current (AC) electricity supply system.  At the museum, we took a tour and were shown some of Tesla’s discoveries and experiments.  We followed up our Wednesday afternoon by walking around the city center before heading back to the hotel and having dinner.

Thursday came around, and so did the beginning of the conference.  There were seven schools attending the conference from four different countries, including Bosnia, Bulgaria, Serbia and Macedonia.  The day’s topic was “Labor Force at the Beginning of the Twenty-first Century: Overdrive or Overload.”  We began our workshops for the day where we were divided up into three different groups; one was the trade union, one was the government, and the third side, also my side, was entrepreneurs.  We were given the scenario that our country had a high budget deficit and was in a long run recession.  From here, we had to give our stand point on minimum wage, working hours, taxes and contributions, terms for layoffs, industrial actions, and retirement. The trade union and the entrepreneurs stated and debated their opinions while the government moderated and asked questions.  At the end of it all, the government came up with a new law. It was interesting, because the whole point of the workshop was to show how everyone needs to be responsible and compromise in order to benefit all of society.

Later that night we took a stroll through the city and visited the magnificent Belgrade Fortress. Built in 535 but revamped and modernized in the 16th century, this monstrosity covered much of the hill and provided excellent views of the city.  Following dinner, everyone from the conference was taken on a river boat tour that provided amazing views of the city. Belgrade is located at the confluence of the Sava and Danube rivers, so there are many bridges.  Belgrade to me was a cross between the U.S. cities of Pittsburgh, Pennsylvania and Boston, Massachusetts.  One of the fourth year students of the host school, whose job was to take pictures, gave me the whole run down of the history of many parts of the city.

Friday and the second day of the conference was similar to the first, except there were different topics to discuss.  The topic for the day was “Culture through the Looking Glass of Ideology.”  Each of the schools presented pre-prepared presentations about the cultural budgets for each of their home countries.  Everyone was again divided into three groups, however this time with different people, and we were given one of three ideologies.  I was part of the conservative group, while the other two groups were socialists and liberals.  We were then set with the task of coming up with a cultural budget and delegating how much money would be spent.  The whole point of the activity was to focus on how ideologies affect culture.  Following the closing ceremonies, we traveled into the city for the night, where we then again walked around the city, visited two of the largest Orthodox churches, and visited the fortress again, but this time at night.

Saturday involved traveling to the “USCE Shopping Center,” which is currently the largest in the Balkans. There were so many stores; it was like your average mall in the United States.  After shopping and hanging out there, we headed to the bus station and headed home.

Overall, my trip was an exciting experience and my first time traveling outside of Bosnia and Herzegovina this year.  Going to Belgrade gave me a better perspective of the Balkans.  Belgrade is much larger than Sarajevo and is very modern, more typical of other large European cities. I enjoyed not only being in Belgrade but also for the reason of the conference which has only added to my many influential and eye opening experiences.  I strongly agree with the idea that only by experience and travel can one understand people and other places.  The internet and smart phones can only provide me with so much information.  Only by traveling and seeing for myself can I create my own opinions and assumptions of people and places.  I hope there will be an influx of international conferences not just in this region but around the world in the future, because I know it would benefit society and young people.