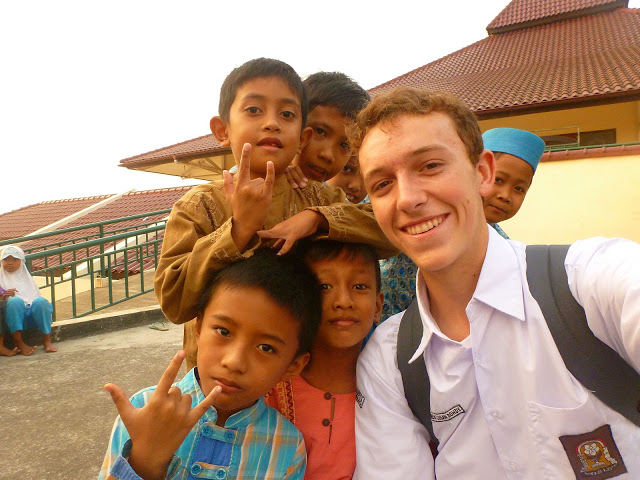 In the first two weeks of February I have devoured home-made tacos with friends and made my first trek into Central Java. But pounding out tortillas and tearing through markets for that perfect Batik wasn't even as interesting as my first trip to Kota Tua in Jakarta -The 'Old Town' Dutch Colonial District.

After walking an old cobblestone road, I arrived at the old square lined with whitewashed edifices. Not so long ago, this little square was the administrative heart of a colonial empire. Such a strange thing to see just as it must have looked a hundred years ago or so, despite the mix of people in the square being decidedly different.

The highlight of my trip to Old Town was my trip to the Wayang Museum right on the main square. Wayang is a museum for beautiful and original art for from Indonesia. It ranges from punched leather shadow puppets gilded in gold to three-dimensional wooden puppets. Because we got to the museum right before it closed, we got a tour from a 7th generation Wayang puppeteer - the curator. The museum exhibited puppets from few hundred years ago up until the work of the curator's father – many exhibited in show cases that were gifts from the US Embassy in Jakarta. He even said that someone from the Embassy was trying to schedule him for a Wayang show in the US next Fall!

One particular story captured often by Wayang was the story of Samar and his three sons. Each puppet was squat, fat, and fairly ugly looking. To correct the visual statement, the curator insisted, "Samar and his sons are the most handsome men in the world. They just choose to look like this to test people. To see how they judge a man."

This short experience taught me many things. It showed me the good friends my own government is making abroad, and this beautiful cultural heritage that is so very supported by the American Embassy. I loved seeing this purely Indonesian style of art that carried age old Hindu epics into a shadowy life. Through echoes of Indonesia's intercultural past, I spotted a tiny piece of Indonesian culture: not being as quick to judge on appearances as perhaps we are in American culture. It is an idea that is a virtue anywhere. Even in America we have the saying, "Don't judge a book by its cover." I suppose in Indonesia you could say 'Don't judge the ugly puppet by his face." What you're seeing after all is just a shadow of the delicately crafted, hand-made, golden-edged artwork embodying perfection.