Coffee. Days and days of coffee. It seems that going out for coffee is all anyone does here in Bosnia, and in some ways that IS all they do. But coffee is more than wasting away the day, it is a way of life. As soon as you sit in one of those cafe chairs, time ceases to exist. Your whole life becomes that moment and spending it relaxing, drinking and sharing conversation.

That is the other thing—not once have I seen someone sitting alone. Coffee is a shared event. The streets are lined with so many outdoor cafes it’s hard to believe that all of them stay in business, but each one is almost always busy with people. At first it was strange for me to see so many people doing what appeared to be nothing with their day, but now I have begun to appreciate the simplicity of their ways and indulge in cafe afternoons. 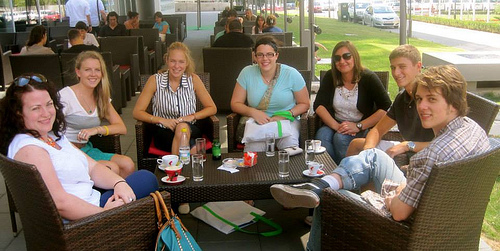 In addition to constantly going out for coffee, there are a couple of other aspects to the “Bosnian way” that I have noticed. One is that a lot of people here tend to have an attitude that seems to be very “it will happen when it happens, and if it doesn’t, then oh well.” While talking with some Bosnian friends here about the political situation in their country, they all agreed that there were some serious issues that needed to change, but no one wanted to do anything about it. They simply laughed, shrugged their shoulders and made some snarky comments. It’s hard for me to see an entire group of people appear to feel so hopeless in their futures and what they can do to change them. Problems are ignored or tolerated instead of challenged or adjusted. Besides the physical scars throughout Sarajevo, this kind of attitude seems to be the second most obvious impact of the recent war here.

Now, I don’t want to give the wrong impression about the Bosnian people. While a lot of them have what appears to me to be a sarcastic way of looking at life, they all come across as genuinely kind-hearted. Aside from the occasional waiter annoyed by us speaking English, everyone has been extremely patient with our learning. There is a regular bakery that the other YES Abroad participants and I go to, partly because it is across the street from the school, but mostly because they are sweet with us. They will wait while we attempt to order in Bosnian, and then they laugh and remark how we are “so cute.”

Life in Bosnia is not at all what I thought it would be. I’m not even sure if I had an idea of what it would be like, but it wouldn’t have been anything like this. In some ways I feel completely at home and comfortable with living in Bosnia, but on the other hand, there are so many new patters and routines to get used to that it can be a little overwhelming. I try not to compare my life here to my life in the U.S. because when I think about it, my life before seems irrelevant. These are new experiences that I am having, and they have nothing to do with the experiences I’ve had. My life will never be like it was. It’s an interesting perspective to look at my life as “before” and “after” with Bosnia as the transition, the turning point so to speak.

So far my favorite parts of my Bosnian life have been exploring the city and living with my host family. I feel so lucky to have the sisters that I do.  With them it was an instant connection, and one which continues to grow. Sometimes I find myself missing them if I haven’t been home all day or trying to take tabs on the things I do so I can tell them about it later. I also absolutely love my host mom, even though I can’t understand half of what she says. Sometimes it will just be my host mom and me in the house, and she will talk to me knowing full well I can’t understand her. I try and pick out words I know and respond to her, but it usually ends in us laughing at or with each other and a knowing pat on the shoulder. When there is someone there to translate for me, my mom is either saying something hilarious or so motherly—I love it!

When I’m not home with my family I am usually out exploring the city. I have been walking everywhere, which along with good exercise has given me an advantage when it comes to knowing Sarajevo. Most of the city is so beautiful, with all of the old architecture and bright colors.  But there are also parts of the city that are tragic. It’s the details—a shattered window, paint that has started to peel or sad stray dogs that scrounge through the trash—that show another layer to Sarajevo. There will be times I will be looking up at a building, admiring the structure, and then I will notice that an entire wall is marked with bullet holes. Or I will be walking down a street and come to a house that looks uninhabitable, yet there will be a small curtain in the window and a flower pot on the doorstep. Sarajevo is a fusion of admirable and painful history that makes it the lovable place I now call home. 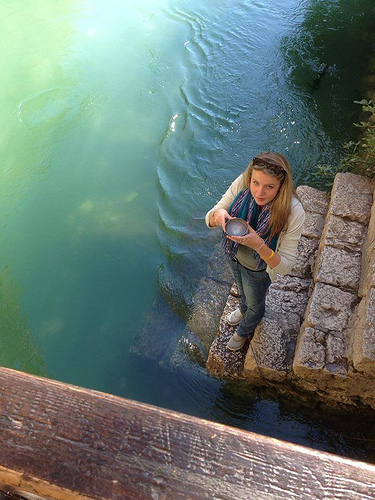