After my satisfying slumber, I awoke to the smell of fresh pica (pizza) being baked by my host mother on the morning of February 14. A shower and a brunch later, I crammed into a Yugo with five others of my extended host family. Destined for the Sarajevo neighborhood of Buća Potok, we made our way through the winding roads and storied hills of Sarajevo to the bride’s home. 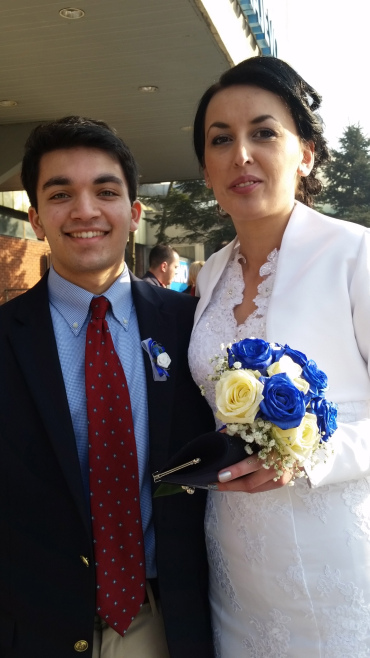 The bride is my host mother’s niece, so I was to be participating in the festivities of the wedding as a representative of her side. Tradition in Bosnian weddings is for the day to begin at the bride’s house where all her family and friends assemble to put the final touches on her dress and prepare her for the “send-off.” As is Bosnian custom, there were several, several cups of coffee drunk, along with jokes passed around by my host uncle. One of the gentlemen in the room had come to my home earlier in the year, right after I first arrived and spoke virtually non-existent Bosnian. Time passed, and I learned more and more Bosnian, so that when I saw him again at the wedding, I was able to talk to him and found out he now works in Mecca, Saudi Arabia. Time flew as I shared stories with my extended host family about my home in the United States, my experiences in Bosnia, and my funny faux-pas in my studies of Bosnian. Then came the second phase of the wedding-day celebrations, where the groom enters the home of the bride to take her away.

As the 15 men on the bride’s side waited for the groom to arrive, one of the chaps in my company was having some trouble tying his tie (I was one of the two others wearing a tie). The other man wearing a tie tried tying it, but again was having a few difficulties. This is where I came in. I offered to tie the tie and give him the pre-tied knot with all the glory deserved of an expert at tying ties from the other men as we waited. Then, the entourage arrived.

The groom’s family and friends arrived around noon in a succession of cars coming up the hill and had lunch in the dining room. Some spoke to me in German thinking I was from Deutschland, and others spoke to me in Turkish. But behold, to all their surprise, an American cracking Bosnian jokes was amongst them. As a vegetarian, I scouted out my survival food in Bosnia—the pita.

After lunch, a select few family and friends headed out to the municipality to have the marriage officially registered. The journey from Buća Potok to Općina Novi Grad was filled with everyone in the succession of cars honking to let everyone in Sarajevo know there was a new couple on the block. A small affair that took a few minutes at the municipality (općina) was followed by a visit to a local džamija (mosque), where the imam gave his blessing and read a few passages from the Quran. After džamija, we headed to a restaurant in Alipašino Polje, my neighborhood, to conclude the celebrations.