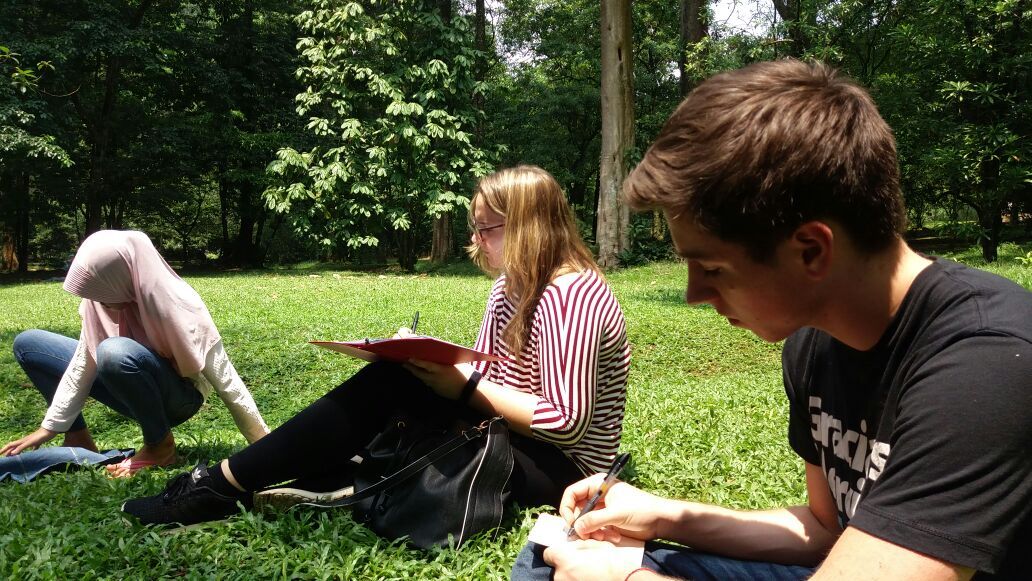 Arriving in Indonesia, I was immediately overwhelmed at the vast differences from the life I had always known in America. Little by little I was able to understand the sources of my culture shock. I started by adjusting to the obvious things, collectivist culture, the tropical climate, and a rice centered diet. As my exchange progressed I moved on to the more subtle stuff. Differences that I hadn’t noticed at first, I found myself considering a couple months into my exchange. Different attitudes about money, divergent ways of showing respect, and an openness to strangers all fell into this category.

Giving a presentation at a school a couple weeks ago I found another one of these second-tier differences manifest on the faces of the students who were listening to me: I could not believe how much they smiled. Even going back and looking at the pictures from that day, I am amazed at the happiness that I could see on their faces.

After I arrived at the school I was given a tour and wherever I went I noticed the students staring at me. I could feel their curiosity, even though they were too shy to come and talk to me. Most of the students I saw were primary school age, but there were a few small high school classes as well. Then I gave a short presentation to the assembled students about my daily life in America, followed by a question and answer session where they could practice their English and ask me about my experiences. After about an hour of questions, I was led back through the school grounds to the parking lot. This time however, something had changed. The students didn’t look away when I met their eyes. Instead they waved at me, smiling and yelling good bye. When I waved back, their smiles tugged at something inside me.

The contrast was incredible, arriving as a stranger and leaving as a friend, or even some sort of celebrity. It was when I was answering questions, I believe, that everything changed. It was there that the barrier fell. As I answered the countless questions about my experiences in Indonesia and my life in America, my enigma as a foreigner fell away. As we laughed, the students forgot their shyness. As they tried to teach me to play a traditional Sundanese instrument, our differences in religion and nationality became completely irrelevant. This sudden realization was the reason for my exchange and a reminder of why I was thousands of miles away from home.

Now I’m seven months into my exchange and for the most part I am past the difficulties of the first few months. Still I often notice things that I had never seen before, and each day my understanding grows more complete. Adapting to life here has also meant adopting values that aren’t as important in the States as they are here. I’ve found myself attempting to be more generous, placing a greater emphasis on humility, and trying to keep the smile on my face that I discovered in the courtyard of that school.