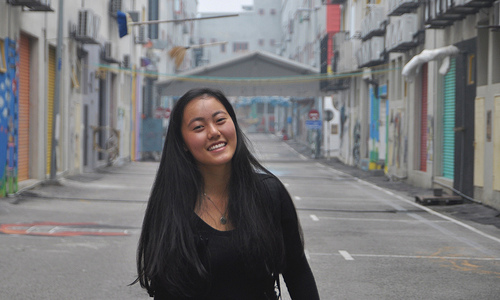 An Olympia High School student, Fay is studying abroad in Shah Alam, Malaysia, where she has sought out opportunities to share her American experience and expose her to the richness of Malaysia. Fay volunteers weekly at the PT Foundation, a community-based organization that provides assistance to HIV/AIDS affected populations and advocates for sexual health, gender identity, and HIV prevention. Fay also joined YES program alumni to facilitate a “U.S. Information” booth hosted by AFS-Malaysia during a “Passport to the World” event. Fay spoke with Malaysians about life in the United States, and connected with her reciprocal YES peers.

Fay’s memorable experiences include celebrating Hari Raya and going to prayers with her host family, school dances, organizing a trip to the Malaysian Philharmonic Orchestra, attending the Kuala Lumpur Eco Film Fest, learning cultural dances, attending Hindi wedding ceremonies, and stumbling upon a Buddhist Temple in Kuala Lumpur and talking to a bookstore owner for hours about Buddhism.

Her initiative to identify and pursue opportunities throughout her exchange has been constant, and she remarks: “I love how unexpectedly amazing things can be, especially when you try to put yourself out there. I’ve had countless thought-provoking conversations, formal and informal, not only with my host family and at school... I do believe in the power of these intercultural interactions to fill the world with a little more understanding and love,” says Fay. At school, Fay has enjoyed the little interactions: “My classmates have been so curious and so receptive. They help me learn about myself, Malaysia, and the world, and I share as much as I can with them.”