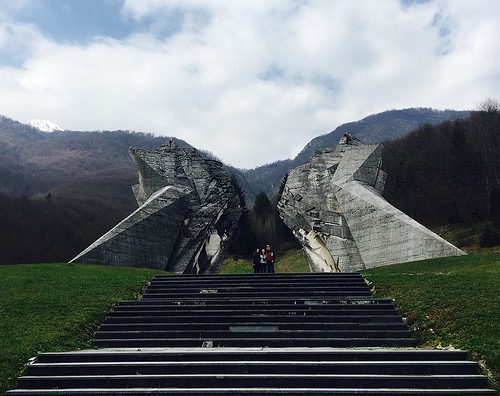 On Saturday, March 19, the YES Abroad students in Sarajevo took a trip to Herzegovina. Herzegovina is the southern region of Bosnia and Herzegovina, and although no official border exists, it has a dramatically different climate and landscape. Its borders are basically formed by Croatia, Montenegro, and a few mountains to the north. Herzegovina is much warmer than most of the Bosnian region, with hot summers and mild winters stemming from its position near the Adriatic Sea. The trip started at 7:30 am, and we headed south from Sarajevo towards Herzegovina. The beginning of the drive was fairly typical of the region, up a winding mountain road. We even had an entire herd of sheep dart out in front of our van.

Our first stop was at a cute café that used mountain stream water in its faucets, which meant the water was extremely cold! Shortly thereafter, we reached Tjentiste where the Battle of Sutjeska occurred in 1943. The Battle of Sutjeska was a battle between Axis powers and the Partisans, which the Partisans notably won. In the place where it occurred, there’s now an eerie monument that the government of Yugoslavia built in 1971. The rest of our drive was really interesting. The area of Eastern Bosnia we drove through was one of the central areas of conflict in the 1992-1995 war, and as a result, we passed several areas that were marked as still having landmines. There are a large number of landmines in hills and mountains in Bosnia that were never detonated or removed, and they’re usually marked to avoid- although they sometimes shift with heavy amounts of precipitation.

We drove over the Cemerno mountain pass which serves as the boundary between the two climate zones, because it stops the warm Mediterranean air from moving North. As opposed to the cold, tree covered mountains of Bosnia, Herzegovina was hilly, warm, and only had small trees. We continued on, passing our coordinator’s hometown, and kept driving along the beautiful artificial lakes (courtesy of the Austro-Hungarian Empire) and winding rivers until we reached Trebinje. 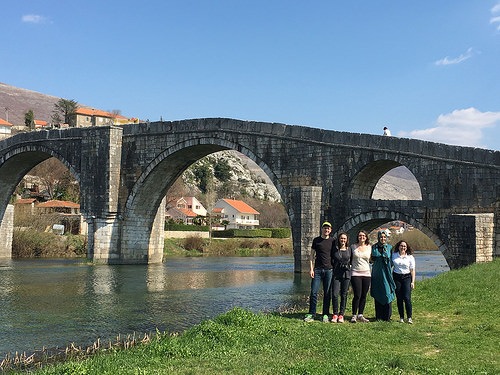 Trebinje is the southernmost town in Bosnia and Herzegovina. It is located on the River Trebisnjica, and has a famous bridge called Arslanagic Most, which was built by Mehmed Pasa Sokolovic like the bridge in Visegrad. It was built 5km north of Trebinje in the 16th century and was then moved, stone-by-stone, in 1972 for the sake of preservation when a dam was built in its original spot. During the Bosnian War, Trebinje was used as a base by the Yugoslav People’s Army when they were shelling Dubrovnik. During this time, the town’s Muslims fled and the majority of the mosques were burned down. However, despite its dark, recent past, I really liked present-day Trebinje. It was beautiful and warm, with a very peaceful feeling. The river was bright and almost turquoise in color, with people fishing on it and others walking along its banks. It was backed against beautiful mountains and a picturesque downtown. It is a wealthy, peaceful, and self-sufficient town that produces electricity for the surrounding regions using its river. Ultimately, it is one of the nicest places I’ve ever been. 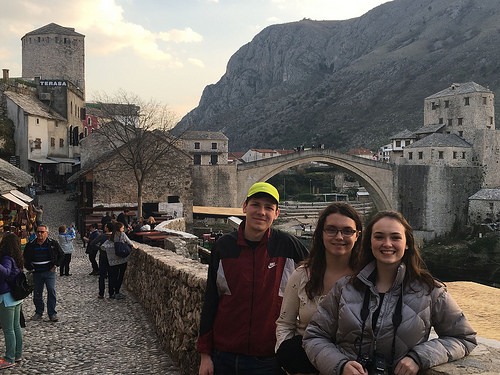 The next place we visited was the town of Blagaj. Blagaj is an ancient settlement, and evidence suggests it once hosted Illyrian and Roman fortresses and militaries. It was also the home of the Bosnian royal family. In the 16th century, the Ottomans built a tekija, a spiritual house for the Dervishes, at the head of the Buna River, which flows from a 200 meter cliff wall in a mountain. In Blagaj, we ate some of the local fish, visited the Tekija (which still serves as a mosque to this day), and took pictures of the mystical Buna River. The final place we visited was the city of Mostar, which I had been looking forward to seeing all year. Mostar is the location of the somewhat iconic, UNESCO World Heritage Site, Stari Most (Old Bridge). It was built by the Ottoman Empire in 1566 and connected the Catholic and Muslim sides of the city. It was torn down by Bosnian Croat forces in 1993 but was rebuilt by Turkish architects to be as close to the original as possible and was completed in 2004. It crosses the Neretva River and stems from the beautiful old town. The city is huge but has a very small-town feel with lots of people out shopping, eating ice cream, and riding bikes. It has gorgeous churches and mosques such as the Koski Mehmet Pasa Mosque (1618) and has a lot of classic, beautiful Ottoman architecture.

The trip to Herzegovina was ultimately extremely peaceful and educational. It was a nice opportunity to see other parts of Bosnia, to learn more about history, and to get away from our routines for a day. It’s definitely a trip I will always remember. 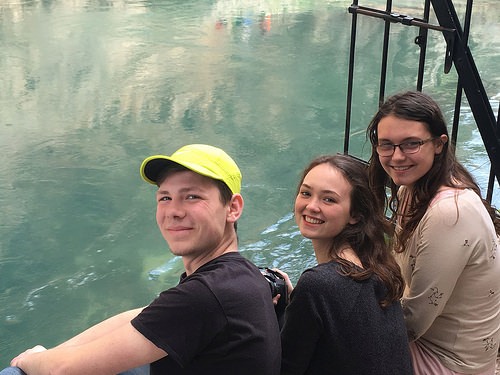