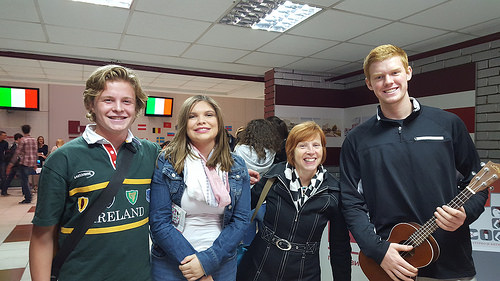 On September 25, 2015, cities throughout Europe celebrated European Day of Languages (EDoL). This day give them the opportunity to celebrate different European languages, their diversity, and traditions. Cultural and educational institutions put together plays, concerts, and fairs so that their students can showcase their knowledge and passion for certain languages.

Bosnia and Herzegovina is no different. For the second year in a row, YES Abroad students placed in the city of Banja Luka had the chance to participate in events celebrating EDoL. In 2014, Alessandra G. took part in a series of short plays and skits organized at the National Library of Republika Srpska, where she read a poem in BCS (Bosnian/Croatian/Serbian). Then, together with the other YES Abroad student in Banja Luka, Paige P. acted as an English teaching assistant during a workshop for elementary school students.

This year, the three YES Abroad students in Banja Luka, Georgie B., Matt M., and Alex M., participated in activities organized by the National Library of Republika Srpska and by their high school, Gimnazija Banja Luka. The EDoL in Gimnazija evolved from a small language fair held in a few classrooms, into a school-wide activity. The event included an hour long performance, during which the students enthusiastically performed skits, played instruments and sang in various languages in front of teachers, parents, school staff, and students.

During the morning of September 25, current YES Abroad students participated in an English language workshop for elementary school students at the American Corner. They were true youth ambassadors as they answered questions about themselves and the United States, played board games, and encouraged the younger students to speak English.

Later that afternoon, back at their school, Matt was given the honor of co-hosting the EDoL festivities with his classmate. His co-host first welcomed everyone in English, and then Matt followed by welcoming everyone in flawless BCS.

This is how Matt felt while showing off his BCS skills in front of an audience of some 200 people:

“‘Dobrodošli na Evropski Dan Jezika [Welcome to the European Day of Languages].’ The whole crowd erupted with applause, much louder than I expected. They were not just congratulating me, they were showing pride that an American learned their native language, of which there are only 19 million native speakers, or roughly, 0.0027% of the worlds’ population. Then, my co-host Sara and I introduced each other. I said ‘I ovo je moja drugarica Sara, iz Banjaluke [And this is my friend Sara, from Banja Luka]’. Again, just as loud as the first time, the whole crowd applauded my small victory, making it that much sweeter. I felt so appreciated. It shows that languages truly have a power in connecting people.  We all think in a language. It’s like opening a door into the mind of another person. It’s a very valuable thing in a world where we just can’t seem to get along, sometimes.’’

The highlight of the day came a few skits and songs later, when Matt and Alex slipped away and returned to the stage to meet Georgie. The boys were carrying a guitar and a ukulele and were wearing sleeveless shirts, headbands and wristbands made out of cut off sleeves, combat boots, and army hats. Just seeing them enter the stage while dressed like that had the audience roaring with laughter and they welcomed the students with a loud round of applause. The group of YES students proceeded to play "Sweet Home Alabama" for the audience.

“Actually we did a really good job. Best of all, we poured our hearts into it,” Matt shared. “We got the crowd clapping, some singing a lot, most laughing, if not, smiling with the smile you would expect to see when three crazy Americans proudly sing a song from the south in Lynyrd Skynyrd get-ups. The audience went wild for a few seconds, and thoroughly congratulated us. I think they found our audacity impressive, and our humor, well, hilarious.” Alex reiterated Matt’s sentiment: ‘’I thought it was amazing how much people knew about other countries in Europe, and I was impressed with the effort the school put into it. It was not a great performance, but you would have thought we were Hendrix at Woodstock with the amount of applause and excitement from the audience.’’

Photo (below): Matt M. (in front), YES Abroad student in Bosnia and Herzegovina, hosting the European Day of Languages at his high school with a classmate. 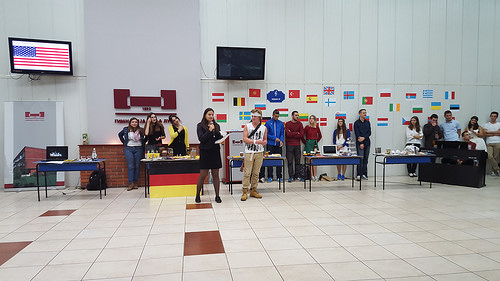