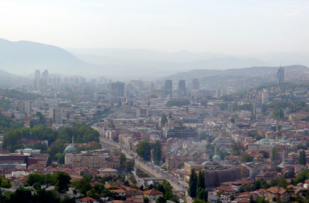 On Tuesday, October 9, 2012, five YES Abroad participants had the unique opportunity to visit Gazi-Husrev-bey Madrasa in Sarajevo, Bosnia and Herzegovina and participate in an Access English language class.

During the visit, Access students provided the YES Abroad participants with a guided tour of the Gazi Husrev-bey Madrasa. A madrasa is a high school focused on religious study of Islam as well as detailed study of additional subjects in arts and sciences. The Gazi Husrev-bey Madrasa is the oldest educational institution in the Balkans, built in the early 16th century. YES Abroad participants received information on what it is like to attend a madrasa in Bosnia and Herzegovina and participated in a class discussion, which focused on voting in Bosnia and Herzegovina as well as in an interactive role-play group activity.

On her first visit to the madrasa, YES Abroad student Anna stated, “The kids we met were beyond amazing.  The first thing I admire about them is their commitment to both school and religion.”  Another YES Abroad participant, Katie, called her visit to the Gazi Husrev-bey Madrasa “beyond fun.” She stated, “After the class, some of the Madrasa students invited us for coffee where we talked about music and cultures and just about everything, which turned out to be an evening of making new friends.”

The Access program was introduced to Bosnia and Herzegovina in 2004 and has been administered by American Councils for International Education since 2006. It provides English instruction by native speakers to students from all five state-funded madrasas throughout the country: Sarajevo, Tuzla, Veliko Cajno, Travnik, Cazin and Mostar. Upon completion of the two-year program, students receive diplomas from the U.S. State Department.