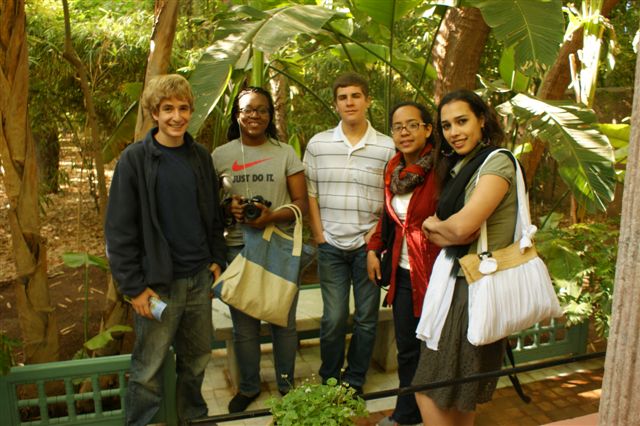 I watch as my language turns these young adults into infants, as they grope and clamber over its craggy syllables and slip and fall into its grammatical crevasses, skittering nervously through the perilous pronunciational ravines between “thorough” and “enough” and, moments later, “dangerous” and “dangling.” The students have no affinity for these letters: they know that they cannot be trusted. The same character that months ago helped them to form the word “cat” now brings them opprobrium when, seeing a round shape, they call it a “kerkle.” It is a traitorous tongue, English, full of back-stabbing consonants that are even more threatening when they pair up. A c on its own is one thing, but once it gets hold of an h – then, you’d better watch out, because there is a chin, a chiropractor, and a chaise lounge coming your way, each wielding its own deceit.

I watch as they fall all about the syntax like drunkards, throwing apostrophes in the air and skirmishing with possessives and subjunctives. I try to coax them softly back onto their feet, but then the clock strikes six and they all laugh. It’s time to go, and suddenly they are powerful again.

They don their mother tongue and now assert control over their words, swinging through and between them with an ease that I have yet to even approach. As we bid farewell, on their own terms, I am the infant, I am the drunkard. I slip and trip and fall, my r’s landing flat on their faces, bleeding and kicking feebly next to the carcasses of the vowels that I couldn’t coax fully formed from my throat. But we all laugh and smile at each other over our b’slamas and bye byes, and with those sentiments, the wordless ones, we have no age or country. We speak a single language.

I have been in Morocco for several months now. I live with a Moroccan family, study in a French high school and teach English several times a week. Though I have always loved words, never in my life have I had to think so much about them.

Morocco, after all, is a country that has fallen over its words throughout history, and still isn’t quite straight with its linguistic predilections. It was an Amazigh empire before the Arabs came in the seventh century; the Spanish arrived around the fifteenth. In 1912, the French came, along with more Spanish colonizers, and the country became a protectorate of those nations. The languages of French and Spain were widely taught for several decades, but Morocco’s declaration of independence in 1956 incited a wave of nationalist sentiment that gave rise to an Arabization of the educational system, creating a generation of Moroccans who spoke little French at all.

Today, Moroccan public school classes are taught in Arabic, the official language, with French lessons incorporated into the curriculum beginning in fifth grade. Students are confronted with a difficult reality when, upon entering university, their coursework is entirely in French. The children of the elite often attend private French lycées for secondary school; in the North, it might be a Spanish escuela secundaria instead. And Tamazight, currently spoken mostly in rural areas by the indigenous Amazigh people, was made one of the country’s official languages last year, along with Arabic.

The language spoken on the street is darija Arabic, the Moroccan dialect, which is so far from the classical fusha Arabic spoken as a lingua franca in the regions of North Africa and the Middle East that it is the butt of many a joke – “no one can understand the Moroccans.” Darija can almost be described as classical Arabic minus most of its vowels, borrowing grammar and vocabulary from French, Spanish, and Tamazight, spoken at great speed and accompanied by many frenetic hand gestures. It varies city to city, neighborhood to neighborhood, and is a significant reflection of culture and socioeconomic status based on the amounts of French, Spanish, Tamazight, or classical Arabic that are thrown into the mix.

What all of this means is some of my students have no language in which they can read, write, and speak with complete fluency. A language is a dialect with an army, and while Morocco has its Forces armees royales, the Fuaat Al’misaah Al’malkia, it has no army in darija. As I was helping one of the students in my high school English class, he said, incredulously, “Wow, Noa, t’es forte en anglais, eh?” – Wow, Noa, you’re good at English. I laughed, assuming it was a joke, but he was entirely serious. English is my native language; of I course I am good at it. I had never even thought of my proficiency in English up to that point. I can read and write, and do both well, but those were always specific skills, not components of a larger one. I don’t know the names of all of my language’s tenses but I have studied their patterns with my ears and eyes long enough and well enough that an incorrect conjugation rattles my brain like nails on a chalkboard. For my Moroccan peers, it is exceptional, an academic achievement, to be “good” at a language, to be one with its rhythms, logic, and accents, because all of the languages that they study are foreign to them in some way.

This realization made me want to weep with gratitude for my own language. I had never before realized what a gift it is, to have a single one to call my own. I have always loved studying foreign languages, but they were, above all, sojourns – linguistic escapes from the everyday. Studying Russian, which I was born into and subsequently lost most of, took me back to the Soviet apartment of my great-grandparents; French was a portal into the gray-blue-white Paris cityscape; and Arabic was a bit of a lark, a dusty guide into the mountain villages of North Africa. Until now, I had never had the urge to escape into English.

I brought only French and Arabic books with me to Morocco, planning to immerse myself. But by the third week here, all that I wanted was to run away into an Agatha Christie novel, to talk straight with Ernest Hemingway and ask Jack Kerouac what he’d thought about Tangiers. I wanted a book that I could swim in the depths of, and my French books kept me bobbing on the surface, forcing me to stay in the shallows with their past simples and long adverbs filled with q’s and x’s. Then the school year began, and French became a necessity: for les sciences, la géographie, l’histoire, les maths and all the rest. All of my classes come with bits of Arabic sprinkled in, mostly insults and admonishments – the words possessing the harshest of the glottal sounds that the language has to offer. “H’mar!” “S’koot!” “N’ta h’muqq oo’la shnoo?!” Donkey! Be quiet! Are you insane, or what?

My craving for English lessened as I was forced to analyze it in ways I hadn’t before. Teaching this language compelled me to deconstruct it, to come face to face with the ugly, confusing parts that I had long ago forgotten about. English is logical to me because English is logic: it is my interface with thought. I scale sentences to reach conclusions. The signposts of my mind are written in English. There is a French quarter in there, a Russian neighborhood, and a growing area inhabited by North Africans and Middle Easterners. But when I need total clarity, I have to walk down the familiar English streets, as they are empty of the hustle and bustle that define the others. On the English streets, there are still vendors selling words of all shapes and sizes, neologisms and foreign imports as well as fossils prized from the calcified pages of times long ago – heady and exciting future acquisitions, all. But at least I can tell, in that part of town, exactly where I am going, and I can wave off the distractions when I need to, promising to return to browse another day.

I make my way down those familiar avenues often, now, paying close attention to all that I see, searching for reasons why – why the gh hides in “thorough” and makes itself heard in “enough,” why g bends in “dangerous” and remains firm in “dangling.” I pluck explanations off of the trees of grammar and etymology and bring them, dewy and ripe, to my students. English is this way because of its French influences; it is that way because of Greek, and that way because of German. I help them climb the slopes of this language, and after class they will try to nudge me onto the right path in theirs.

The people on the street still laugh at me when I ask them for directions in Arabic. “Ah, tu parles arabe un peu!” they say, smiling, but I just smile back at them, and refuse to respond with oui – na’am, I say, na’am. Yes, I do speak Arabic, sir, and you will help me to. Just tell me whether I go right or left, al’limen oo’la al’liser, and I’ll be on my way. I’m building a neighborhood in my mind, you know! All of the street signs there are written in your beautiful, backwards, ancient calligraphy, and I want to be able to walk down those streets like I do the streets of my mother tongue, sure-footed and radiant. Just tell me, a’sidi, right or left.