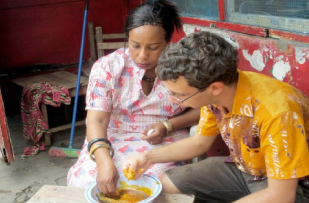 Two television specials on African food, produced with the help of YES Abroad alumnus Avery Segal (Ghana, 2011-2012), will air in the United States on the Travel Channel. Avery served as production assistant for the television segments, Fast Food Gone Global: Africa, and Street Food International, during his stay in Accra, Ghana last year. The shows’ creators discovered Avery through a blog post he had written on Ghanaian fast food and invited him to join their crew during the filming in Ghana. Avery, who blogged frequently on Ghanaian food and culture during his YES Abroad year, spent three days both behind the scenes and on camera assisting with the two programs.

You can tune into the Travel Channel to see Avery’s work: