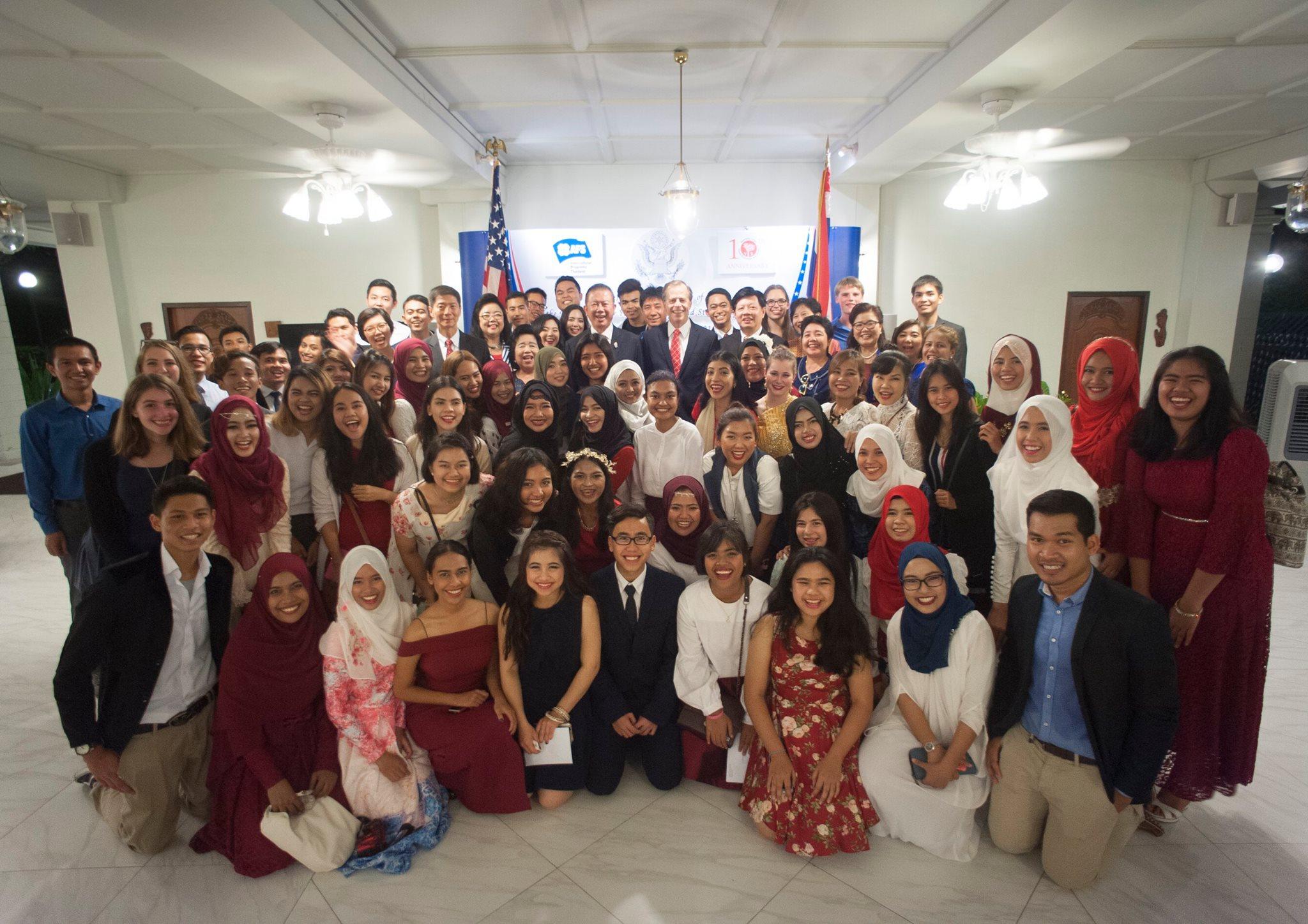 YES Abroad students Emily M. and Annabelle D. discuss their experience celebrating the 10th anniversary of the YES program with the U.S. Ambassador.

Bangkok, Thailand - On Thursday, September 23, 2016, the United States Ambassador to Thailand, Ambassador Davies, hosted a reception at his residence to celebrate ten years of the Kennedy-Lugar Youth Exchange program in Thailand. As a current YES Abroad student in Thailand, I, along with the four other American students, was invited to attend the anniversary reception.

When we first heard news of our invitation, we were all ecstatic to be given the opportunity to attend the event, meet them ambassador, and hear him speak. However, in the weeks leading up to the anniversary, we were notified that we could even have an opportunity to take an active role in the presentations.

The thought was daunting. All of the other guests were older, and surely more worldly, mature, and experienced. One student, Annabelle, wrote a speech about importance and effects of the small, day-to-day diplomacy work of exchange students through our everyday interactions.

"I gave a speech about the purpose and importance of the YES mission, which was an incredible opportunity. I felt a lot of pressure to do well not just for myself (because, I mean, I did want to impress the ambassador), but even more so because I was representing my fellow YES Abroad students, as well as all of those that came before and will come after us. It was difficult to put into words just how truly passionate we all are about the aims of the program and their importance in today’s turbulent world. Writing it, having to sit down and map out my thoughts, really made me appreciate even more the incredible things that the program is doing for the future of international society," said Annabelle.

I decided to use the opportunity to demonstrate some of the Thai cultural skills I had developed by performing a short solo Thai dance.

The day of the anniversary reception, Annabelle and I nervously practiced our presentations in our room. Because I was to dance that evening, I also changed into a stunning traditional Thai costume of rich yellows and golds. After all of the YES Abroad students were dressed and ready to go, we got into the van and headed to the ambassador’s residency. The temperature was perfect and comfortable as we stepped outside to the reception after having our passports checked at the gate. Guests were already introducing themselves to one another, casually standing around elegant cocktail tables.

Immediately, I began to feel anxious, in addition to my excitement. I felt like a very young child, compared to all the adults, and wasn’t sure how to interact with everyone.  I had no reason for fear, and my worries quickly dissipated. Immediately some former Thailand YES returnees approached me and the other YES Americans to introduce themselves. We began chatting about Thailand, and I was intrigued to hear their stories about their years in the United States. It is fascinating to hear about my home country from a completely different perspective. Throughout the evening, I had the chance to converse with several more YES returnees. Everyone was so polite and kind.

"It was humbling to meet all of the YES alumni (who were formerly hosted in the U.S.), many of whom are doing amazing, life-changing, world-saving things even though they are students or recent graduates of university," said Annabelle.

There were some food tables with a buffet of delicious Thai appetizers, including one of my favorite dishes, chicken satay with peanut sauce, as well as a creamy coconut jelly in the shape of a bird. As appealing as the food was, I hardly had time to eat, because I was enjoying meeting all of the guests.

When it was the American YES Abroad students’ turn to meet the ambassador, I wasn’t sure what to expect. We shook hands and exchanged casual conversation. He was very kind and down-to-earth, as was his beautiful wife, and I was quickly put at ease and felt comfortable around him. He congratulated us on our courage to move to Thailand, and reminded us how important our personal diplomacy was. It was very inspirational to meet him, and it made me think about all of the career possibilities I could have in the future, following his line of work.

I rehearsed my dance one final time in the bathroom, checked my jewelry and makeup, and then went to stand with the rest of the guests around a small stage where the ambassador began speaking about the history of the YES program and its importance and impact today. Following the Ambassador was a Thai YES returnee. He talked about his experiences after returning, and the opportunities he has found to continue making a difference by building relationships between counties and communities. I wish I could have focused on his words more, but I was growing nervous about my upcoming dance performance. The YES returnee was followed by Annabelle. I was so impressed by her speech. It was the perfect balance of seriousness sprinkled with some everyday humor about the daily lives of exchange students, that most of the audience easily understood. She spoke smoothly and clearly without faltering, and I was very proud to have her speaking on behalf of the American YES Abroad students.

"It was such a fun experience, and the fact that it was in support and celebration of something I feel so strongly about made it so much better. I’m so grateful to the ambassador for including us in the festivities, and of course to YES for everything they are doing for me, my fellow participants, and the future of the world," said Annabelle.

Next, it was my turn to take the stage. Luckily I’m the kind of person that smiles when I’m nervous. I didn’t forget any of the steps and stayed on rhythm. After I finished (and posed for what seemed hundreds of photos), I felt as if a weight had been lifted off my chest. I relaxed as I watched the final presentation: two beautiful Thai returnees singing a cute song from the movie Frozen. Afterwards, everyone flooded together for group photos.

The party wasn’t over, so there was still plenty of time to mingle and talk more with guests. It seemed that everyone wanted a photo of me in my Thai costume, and people couldn’t stop talking about how mature and well-spoken Annabelle was with her speech. When the night finally ended, I was so grateful for the chance to see and meet so many amazing people. They really highlighted that the diplomatic work of a foreign exchange never has to end, and I am certainly inspired to pursue more opportunities to follow in their footsteps.