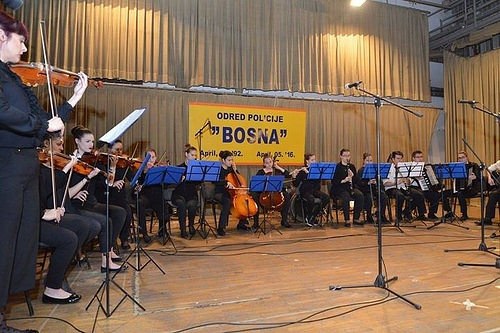 One of the highlights of my exchange so far has been my participation in a youth orchestra here in Sarajevo. The orchestra that I am in is one of many in cultural associations known as “KUD” which promote the learning and performance of traditional Bosnian music, dance, and the arts. Beyond giving me the opportunity to learn about a fascinating part of Bosnian culture, orchestra has been my main source of socialization with Bosnians my age outside of school.

At the suggestion of another participant’s host mom, I joined orchestra at the beginning of October. I had been looking for an activity to get involved in and really enjoyed participating in band at my home school. Howver, I was still incredibly nervous and uncomfortable the first few times I went to orchestra practice. Not only do the students and teachers in my orchestra speak exclusively in Bosnian, but I didn’t know anyone there, and the music we were playing was completely unfamiliar and challenging. It was definitely isolating at first not to know the words to songs everyone else seemed to, not to understand basic greetings and slang, and not to have any friends. I considered quitting nearly every class.

I am SO glad I stuck with it though, and to this day, it is one of the best decisions I’ve made on my exchange. Orchestra gives me the chance to interact with and get to know a small group of Bosnians really well. In most other aspects of my life here, I feel like an outsider at least some of the time, but in orchestra, even when I don’t understand something, the other students really make me feel like I belong. They don’t speak in English to me or get impatient when I really don’t understand why we’re doing something- instead they take the time to share their language and culture with me, which is something that means so, so much to me. Additionally, traditional Bosnian music has a special place in my heart due to the connections it’s allowed me to make with my classmates, teachers, and host family.

Another note-worthy aspect of my experience in orchestra has been the performances. Our first performance was in December, just before Christmas, and I remember finding out about the performance on the very morning of the event. Dressed in my uniform, I sat with the other clarinet players in the restaurant where the performance would be held. We played a couple of songs, and the crowd was really active, singing and clapping along. They were so enthusiastic about one of the songs that we played it three entire times. The sense of community that’s felt when everyone is singing and dancing to the same music in such an informal environment is inexplicable and invaluable. Afterwards, we all went to get coffee, a staple of Bosnian social life, and stayed out late, listening to other orchestras perform and just enjoying each other’s company. 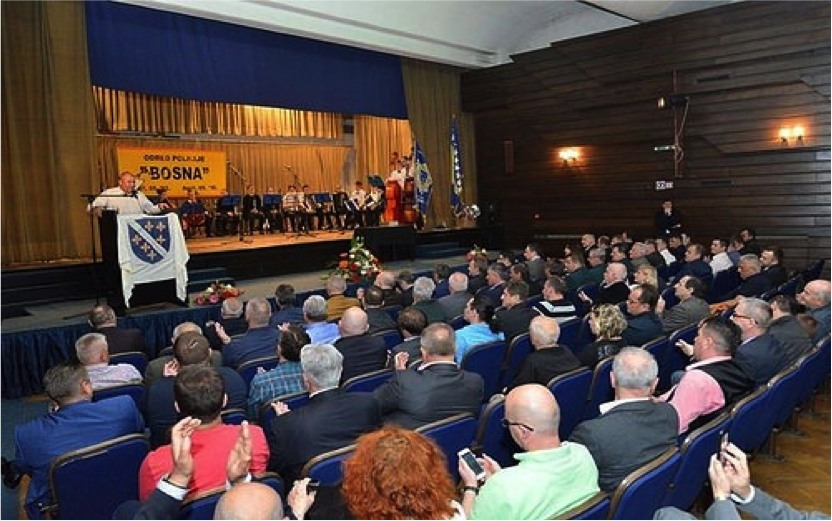 Our most recent performance, on the other hand, was one of the most unique experiences I’ve had this year. Leading up to this performance, we had prepared two songs “Ponesi Zastavu” (Carry the Flag) and “BiH Himna” (the Bosnian anthem) and were told we were performing at “Dom Policije” or the Police Hall. I had no idea what exactly we were performing for, but I didn’t imagine it was a big deal until our teacher emphasized that we should wear our hair in buns this time along with makeup (which is extremely formal compared to normal).

When I got to the event, I was shocked by how nice the auditorium was, on par even with the National Theater in Sarajevo. As people began to enter, the presence of suits was another tell. That’s when my friend Jelena exclaimed, “Bakir Izetbegovic!” To clear up any confusion, Bakir Izetbegovic is one of the three presidents of Bosnia and Herzegovina and is the current chairman of the presidency. The event we were at consisted of several speeches by important politicians and military leaders (although at the time, I still hadn’t realized who the people were entirely). As the evening progressed, and I realized the date (April 5th- the day before the 24th anniversary of the beginning of the Bosnian War in 1992), what the event was finally became clear. It was the 24th anniversary of the special police unit “Bosna,” which was crucial in defending Sarajevo throughout the war. Listening to the speeches, I learned a lot of new information about Bosnia and how Sarajevo was defended during the conflict.
After the event ended, I was ready to go home, and I asked my friend Melika why we were waiting. She told me that we were waiting to eat, and I took this to mean we were waiting for a specific person before going to a restaurant, so I was surprised when, ten minutes later, the doors opened and we were ushered into a banquet room filled with food. At the banquet, there were a lot of politicians, police men, and their families, and it was something almost surreal to be witness to. It’s definitely not an experience I’ll forget anytime soon.
Overall, my participation in orchestra has led to great friendships, interesting conversations (who knew there could be so many differences in musical education by location), and cool opportunities. It’s an activity that really has allowed me to explore Bosnia at a greater depth than I think I would have otherwise, all while continuing an interest I had in the U.S. Every week, I look forward to the two nights that I know I’ll spend in orchestra, and if I could go back in time, the only thing I would have changed is that I would have started playing with them earlier in the year.