"With the Chant of “Govinda, Govinda” in my Ears:" Reflections on a Visit to Tirupati, India 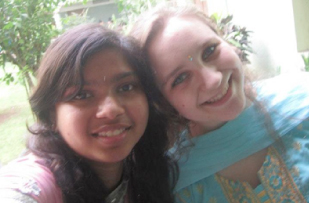 A few weeks ago, I went with my host family to the city of Tirupati, in Andhra Pradesh, for a day. After driving for a few hours, the first indication that we had crossed the state border from Tamil Nadu into Andhra was that all of the road signs were suddenly in Telugu instead of Tamil. I admired the round and curly script and listened to the sounds of Telugu, my host family’s mother tongue, float around us. It seemed so incredible that after only a few hours of driving, we were surrounded by a different language and different traditions. A few more hours of driving in another direction, and the road signs would be written in Kannada, or Malayali. Every new experience that I have in India just proves even more that 10 months is hardly enough time to learn about a fraction of this country.

The amazing thing about Tirupati is that there are actually two parts— Upper Tirupati and Lower Tirupati. Lower Tirupati is a large city full of people going about their daily lives. Upper Tirupati is the home of a grand Golden Temple, and is on top of a mountain. It is believed that people can only go to Tirupati if the Gods “call” them there. You might plan five or more trips to Tirupati, but if you haven’t been called by the Gods, each time something else will come up and you won’t be able to make it. Only when the time is right will a trip to Tirupati work out.

In exchange for their prayers, many people offer their hair to the Gods. Following this pledge, they must travel to Tirupati, shave their heads on top of the mountain, and pray in the Temple. This is where I watched my 14-year-old host brother Sanjay’s hair fall to the ground in submission. I saw more hairless people in Tirupati than I have ever seen in my life—women, men, elderly people, children, whole families of bald people. To me, every newly shining head posed a question, and I wondered what it was that they had prayed for so fervently.

Masses of people literally poured into line waiting for entrance into the Temple. Due to the high demand and limited space, there is a lot of waiting involved before actually praying. The line is contained by a closed-in route which is packed with people. Actually, there are two lines—the 50 Rupee per ticket line (about $1.00) and the 300 Rupee per ticket line (about $6.00). The 300 Rupee ticket line moves much faster than the 50 Rupee ticket line. My family was in the Rs. 300 line, and we had a connection in the Temple, and it still took us hours of waiting to get in. I couldn’t help but admire the perseverance and devotion of the people in the Rs. 50 line, who were willing to wait all day just for a glimpse of their God in the Temple.

The wait in line would certainly not be pleasant for anyone with claustrophobia, especially when the people in back of you want to go faster than the people in front of you are going! The line would stand still for long periods of time, and when it did start to move, the whole procession would start chanting “Govinda Govinda” which became a kind of hymn. You can actually hear the line moving before you can see or feel the bodies in front of you shifting.

The reward for this long trek is a coveted moment of prayer in front of the God of the Temple, who is an idol decked out in jewels and flowers. Each person only gets about five seconds or less to stand in front of the God, lips moving fervently in prayer, hands pressed together at the chest, before the next person in line pushes them onward. With everyone squeezed so tightly as to almost become one writhing being, I can only describe the intensity of the prayers as a kind of collective entering into another state of consciousness. When it was my turn in front of the God, I tried to take in as much of the moment as I could before it was over. I had at least twice as long as everyone else, because the guard thought it was so amazing that a foreigner was there praying to his God that he let me stay there for a little while.

After, we visited the other areas of the Temple, praying to different deities and making various offerings. We ate food from the Temple along with everyone else and drank purified water from the water fountain. The whole day was a wonderful experience and one which I will never forget, but I have to say that the moment which will always stand out in my mind is the moment where I stood in front of the God. If I had seen the idol out of context, it would have appeared to me as a rather small statue, beautiful and full of history, but with no significant meaning. In that Temple on top of a mountain, surrounded by people who were offering their most vital prayers to it, watching my host grandmothers lips move animatedly in silent prayer, with the chant of “Govinda, Govinda” in my ears, I couldn’t help but feel that I was standing in front of something truly sacred.