"I am part of something" 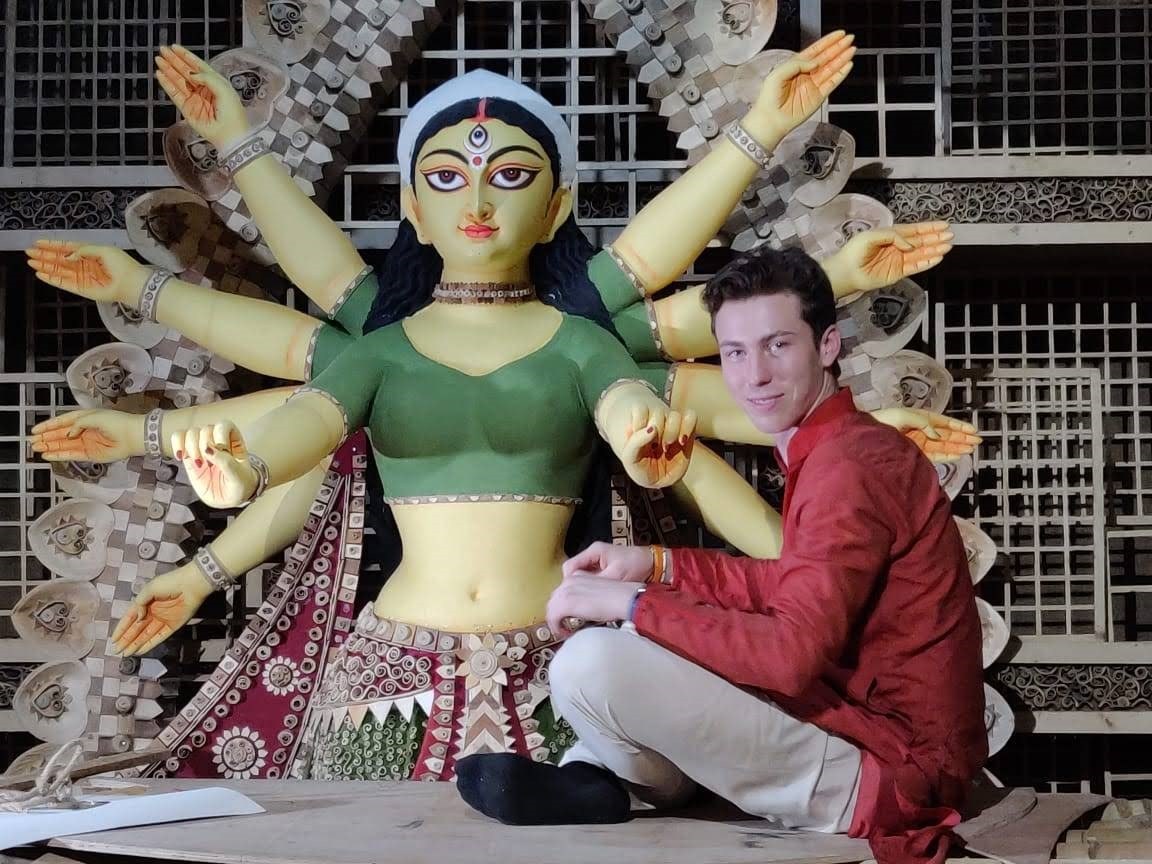 Every year, thousands of people flock to Kolkata from all across eastern India to see the wonderful Hindu festival known as Durga Puja. Durga is the famous goddess of power and strength in Hinduism, and this week-long festival celebrates her victory over an immortal demon. Before coming to India, I had no idea that such a festival even existed, never mind that I would actually end up being a part of it myself.

I first noticed that something was happening when lots of bamboo structures started being constructed a few weeks after I arrived in India, and when I asked what they were, I was told they were called “pandals.” These are temporary structures built to worship Durga during this festival. It seemed odd to me that people would go to such great lengths just for a one-week festival, but I felt curiously drawn to it nevertheless. One day after school, we were taken to see a famous pandal, the Bakul Bagan pandal, during its building stage. Stepping inside was like stepping through a portal into a different world: everywhere you looked, there was something being built, like a little factory, and all in incredible detail. Looking up, I saw makeshift bamboo scaffolding supporting numerous artists as they scrambled around, working on the ceiling.

Since building with wood has always been a love of mine, I was beyond excited to see the piles of lumber and sawdust lying around on the floor. They showed us how they were making every little detail with dried Areca palm leaves, turning the entire bamboo structure into the beautiful color of natural wood. I was mesmerized. Before leaving, I asked if I would ever be allowed to work here and help the artists with the work that they were doing. I was greeted with some confusion, as people thought that the work that was being done might be too dirty or strenuous. However, by asking a few more times, I eventually stepped back into that little paradise the following Monday. 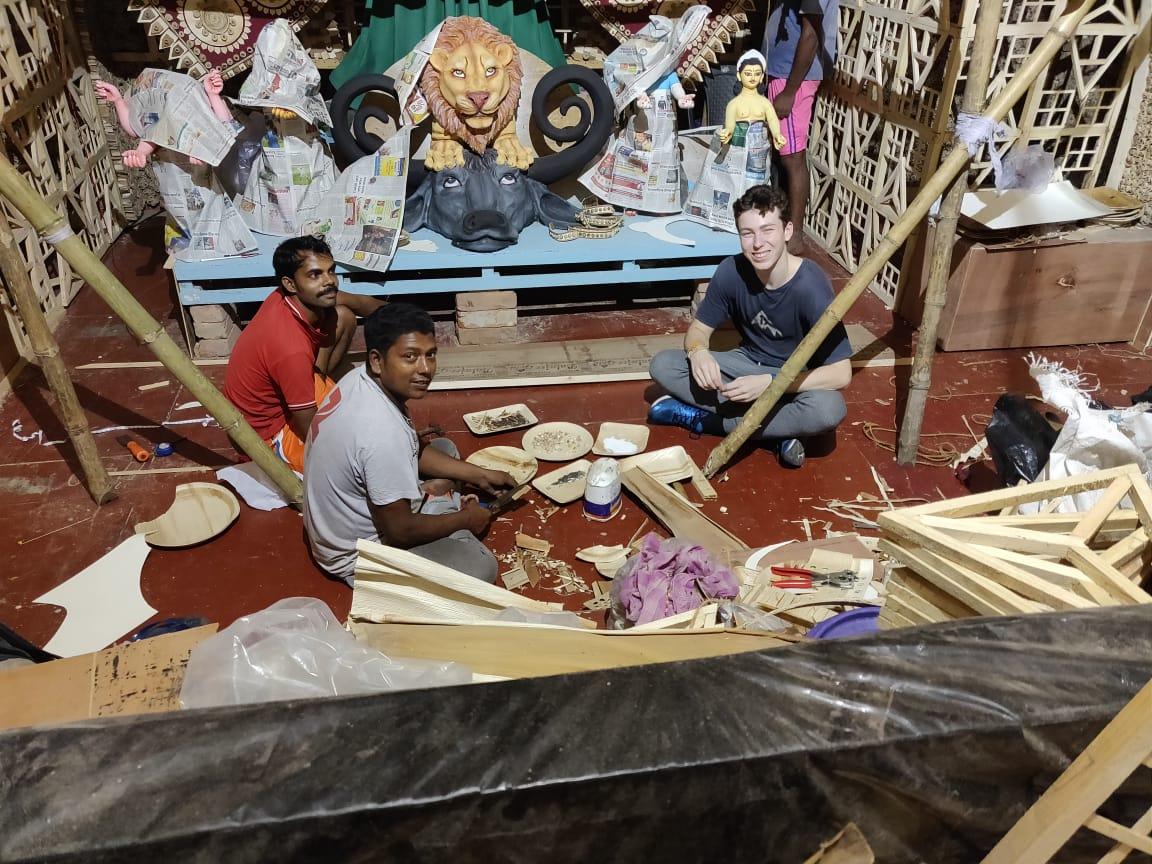 That day, the lead artist sat me down in front of a pile of dried leaves and handed me some scissors and a small house-shaped template. After a few minutes of working, I stopped for a second to look around at what everyone was doing. I just watched and formed a mental image in my head to look back on. “I am part of something,” was all I could think about. It was the most connected I have ever felt here in India to the people around me and the things that they find are important; I wasn’t just another foreigner taking pictures, I was doing the work with them, sharing the burden. Soon, people came by to talk to me, mostly in Hindi, but I liked it better that way. My favorite thing was the tea break, where all the artists came to ask questions about where I was from and why I was in India. I left there with a new self-confidence that I had not yet experienced.

I returned for five more days after school, working an hour or so each time. Before sitting down to work, I walked around to a few of the artists to say hello and ask them how they were doing. One of the last days before the huge festival began, I stopped by to say hello, and all the artists were standing together outside the completed pandal in silence, just watching. The feeling you get after working on something tirelessly and finally finishing was amazing. I had only spent a few hours here, compared to the hundreds that the other artists had spent, but all of us just sat there in appreciation.

At this point, the festival has passed, and we have all moved on with our days – me to my studies and they to their normal lives and homes. Nevertheless, I will never forget the experience that I had working at that pandal and the spirit of generosity that I felt from that community. I am forever grateful to all the people who made it possible, and I hope that, someday after my time on the YES Abroad scholarship, I will be able to return to India help build a new one. 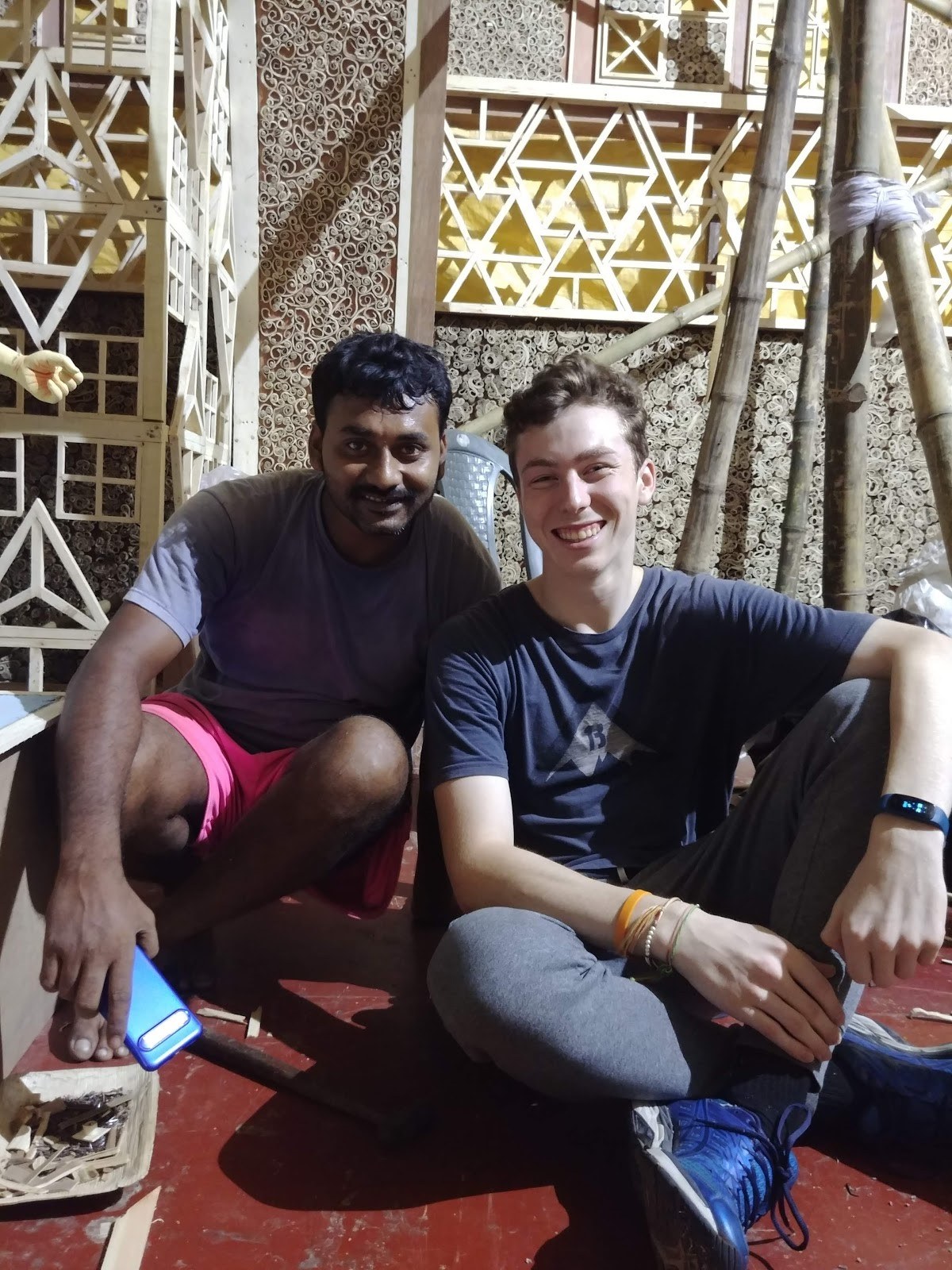