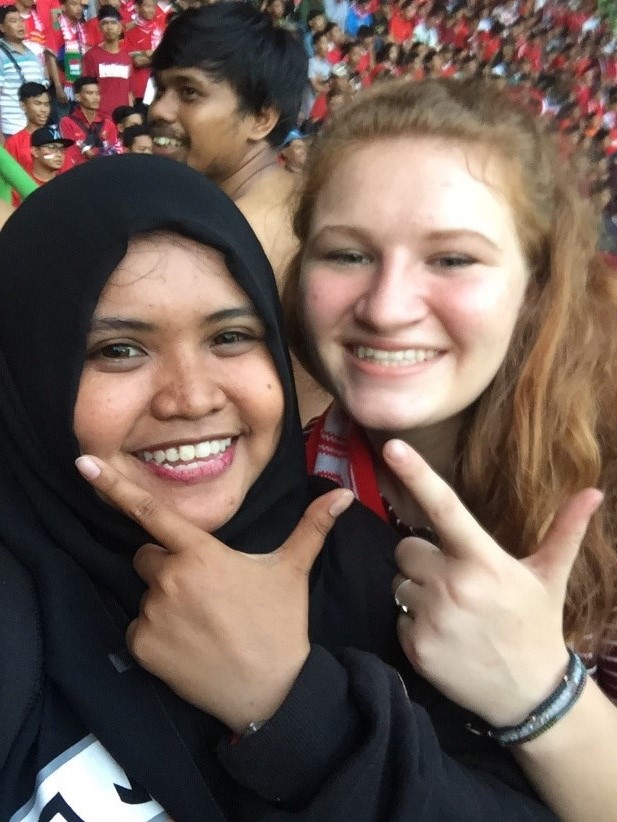 About a month after arriving in Indonesia, I went to a big soccer game between Indonesia and Fiji in Bekasi, West Java with some of the YES alumni in my chapter, and it was one for the books. The score stayed at 0-0 for the whole game so it wasn't very eventful, but it was still amazing to watch. What I really enjoyed, however, were the spectators. Throughout the whole stadium, people chanted songs and cheers in Indonesian and had a lot of national pride. There was a platform above the crowd in front of the stadium where a handful of people stood to lead the cheers and dance and such. They saw me in the crowd (I'm very easy to see, considering I'm a foreigner) and asked me to come up to the platform with them to help cheer. Of course, I did! Everyone clapped and many took pictures, and I watched the game from the best seat in the stadium. It was the coolest thing. Many people in the area don’t see foreigners very often, so more asked for photos after the match. I practiced my growing Indonesian vocabulary with the people I met and felt so proud of myself when I could hold a simple conversation! At the end of it all, we went to get food at a traditional food stall nearby, went to a mosque so the Indonesian alumni could pray, and then took the train back to Bogor. It was a really amazing experience!