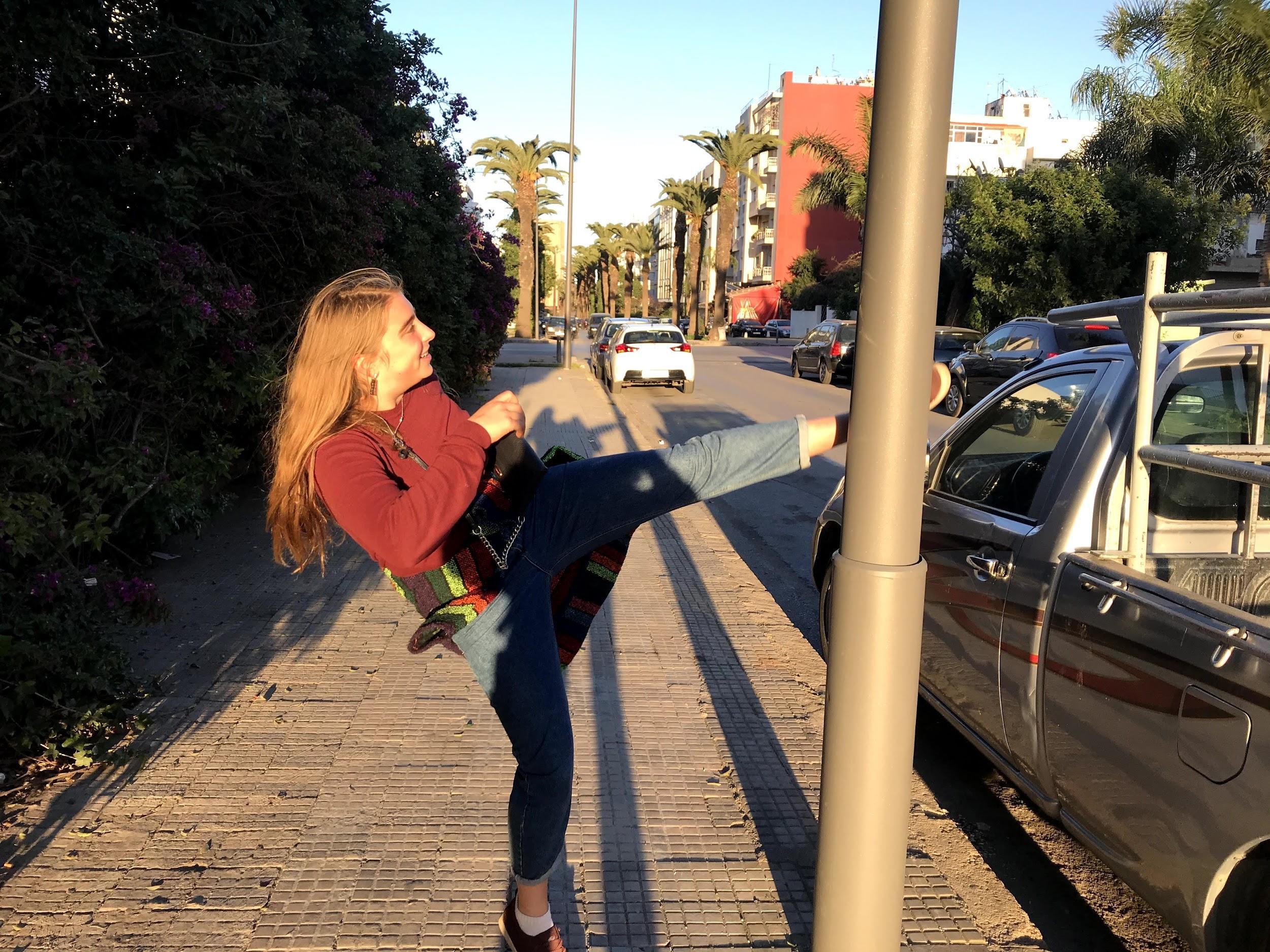 When I was little, I always wanted to be like Rocky Balboa, the legendary boxing champion from my favorite movies. Unfortunately, martial arts were never very mainstream in my hometown in Texas, and my mom wasn’t very enthusiastic about her daughter becoming a fighter. So, I forgot about my aspirations for fighting glory.

When I came to Morocco, I noticed that martial arts gyms dotted the streets. Many of my classmates were part of these teams, and would show off their technique during field trips to the forest. One day, a friend invited me to their local Taekwondo gym, just to try the sport out.

I had no gear, was dreadfully out of shape, and was nervous to take a class over such a technical sport in Arabic, but I went with a silly grin on my face. Walking into the dojang (training hall), there were groups of all ages practicing kicks and fighting sequences. A warm hum of pre-practice conversation was punctuated by sharp cries of attackers. The dummies didn’t stand a chance. In my eyes, it was just like the movies!

The coach walked in, and immediately the room fell silent. We started to warm up with some jogging and dynamic stretches before the real work began. The coach yelled “ecartez” and all the students dropped into a perfect split. Looking across the room, I could suddenly see nothing but a sea of heads below me. There were children who looked to be six years old, grown men, and people of all body types, but they all made it the whole way down. Even doing my best, I had a few inches to go, and the coach noticed. He marched over and barked a few words of command that I didn’t understand, tapping my legs with his wooden rod. When I didn’t
respond, he rolled his eyes and repeated himself more slowly.

“Do you have couscous for brains? Straighten your legs and get down!”

There were soft giggles from around the room, and I felt like a buffoon. Here I was, in a borrowed uniform that didn’t fit me, sweating in a deep stretch and being chastised in a language I barely understood. And I laughed. The whole situation felt so ridiculous that I couldn’t keep it in. 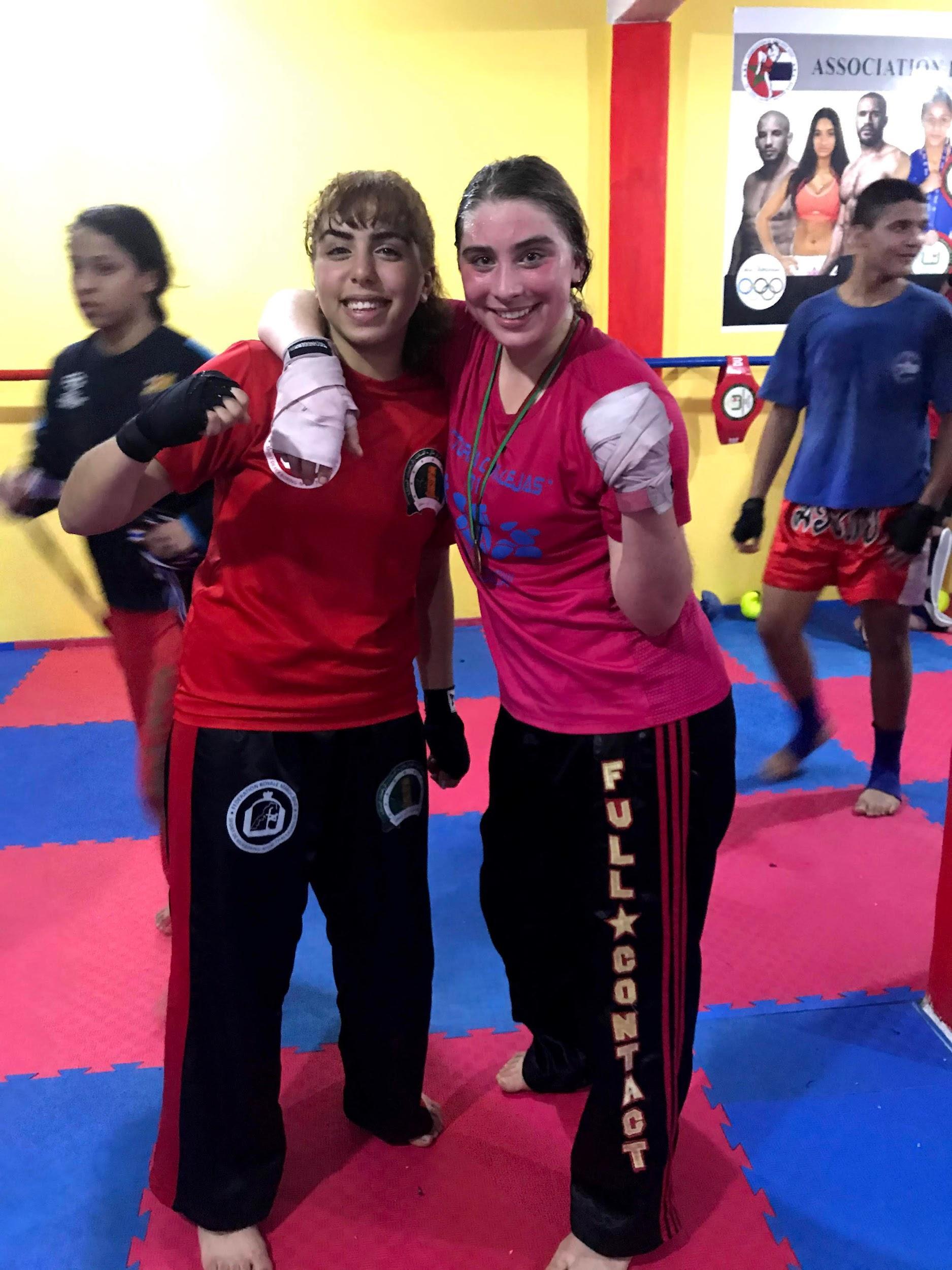 Of course the coach was displeased, and I took a few more laps around the room for my lack of discipline, but I caught him hiding a good-hearted smile. When it was time for combat, we suited up with protective gear and he let me practice with the black belts. Man, it felt cool! Sure, I was getting beat up, but it was Karate-kid style, and after each combat my partner would patiently explain how to execute the kick. At the end of the day, I had learned a few new moves to show off to my host family when I got home, and in the locker room everyone was eager to exchange phone numbers and catch coffee. The coach even nodded “good job” on my way out.

I came home bumped, bruised and exhilarated. I signed up for a membership the following day, and even earned my blue belt before heading back to the US. I made some of my closest friends at that club, and it was a great place to practice Arabic (when the coach wasn’t looking). Taekwondo ended up being one of my favorite memories of my time abroad, and even though I’m still far from Rocky Balboa status, I think I learned just as much.