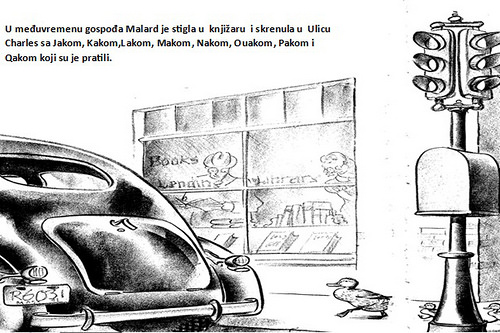 Dan’s favorite childhood book was Make Way for Ducklings. Having read it hundreds (OK, maybe thousands) of times, he knew every page and even every scene by heart. Since the book takes place in Boston, near Dan’s hometown, he knew the book would be the perfect gift for his host family as he prepared to set off for his year abroad last August. He didn’t get the idea for his Capstone, however, until he found himself struggling with learning Bosnian. Dan’s host mother spoke no English, and neither did the friends or relatives of hers whom Dan often found himself visiting. One night, a friend of his host mother’s—an English teacher—presented Dan with a book of fairy tales with one side of the page printed in Bosnian and the other side in English. For the next three weeks, Dan read one of the stories out loud each night with his host mom. What he found was that just reading—even if he didn’t understand every word—helped his language comprehension. He was finally able to see how the words and sentences were formed, instead of simply hearing them. He was also able to practice his pronunciation—having to say words he’d never seen or heard before and allowing him to pick up on patterns that had heretofore been simply as mystery.

Said Dan of his project, “I vastly improved my own language skills. I expanded my vocabulary, got a better grasp on some grammatical concepts, and also learned the difference in how I must write versus how I speak. Doing this project and getting the feedback really was some of the best language practice and instruction I got this year.” However, doing the Capstone gave him more than just language practice—it helped him build connections and learn more about the country that he called home for ten months. “I got help from various people while I was doing this project. They were all thrilled to offer their help. One time I was just sitting in a café, and a friend just happened to walk by and see that I was typing something in Bosnian on my laptop. That friend then proceeded to sit with me for 45 minutes, helping me with my translation. People here in Bosnia will really help you with anything.”

When he was done with his translation, Dan donated both the original English copy along with his translation to a kindergarten where he and another YES Abroad participant had been volunteering to teach English. “This book wasn’t just any piece of literature to me—it is very much a piece of my culture.  Make Way for Ducklings was one of the books that my parents regularly read to me before I went to bed.  Now there is chance that some child’s favorite bedtime story might become Napravi put za  pačiće!